President Donald Trump, on the day after his contentious town hall with NBC, got in another round of attacks on moderator Savannah Guthrie and his Democratic rival Joe Biden.

Trump called Guthrie ‘crazy, claimed Biden was running a crime family, and , the moderator of Biden’s competing town hall on Thursday, for not asking the Democratic nominee about his son’s emails with Ukrainian officials.

Many of the crowd inside the event in Fort Myers wore face masks – one woman had on a face shield. The images contrasted those waiting for Trump at his next stop – a campaign rally at the Ocala airport, where crowds of people packed in – many without masks.

In a speech in Florida on Friday, with the subject of ‘protecting our seniors,’ the president riffed on the NBC News correspondent, who pressed him hard on his COVID testing, his tweets and his taxes, and on his rival for the White House. 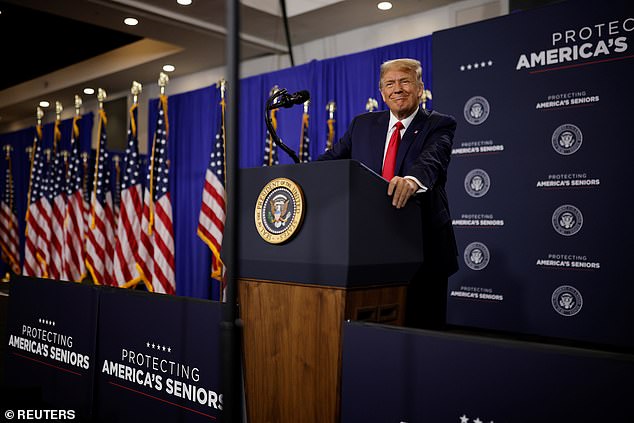 President Donald Trump, on the day after his contentious town hall with NBC, got in another round of attacks on moderator Savannah Guthrie and his Democratic rival Joe Biden during a speech to seniors in Florida on Friday 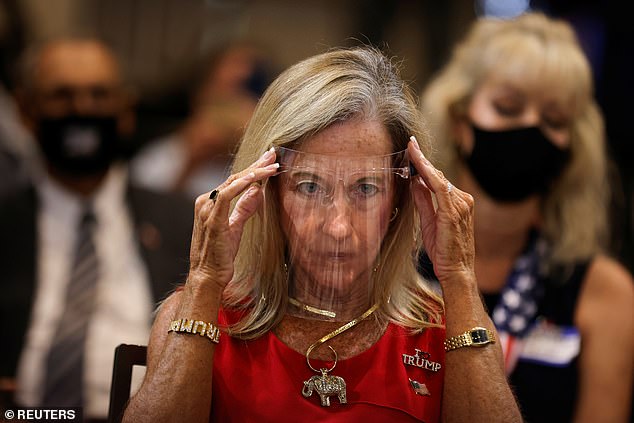 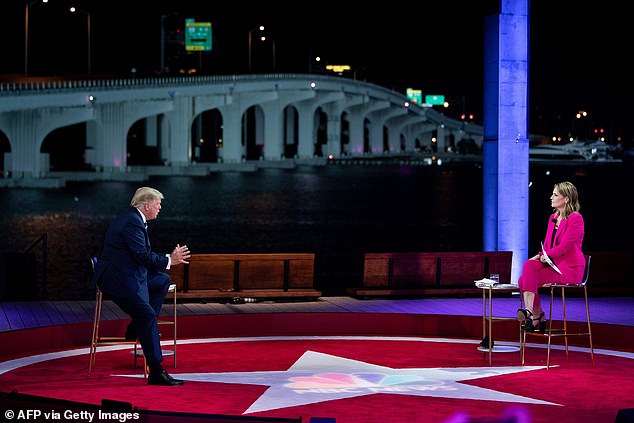 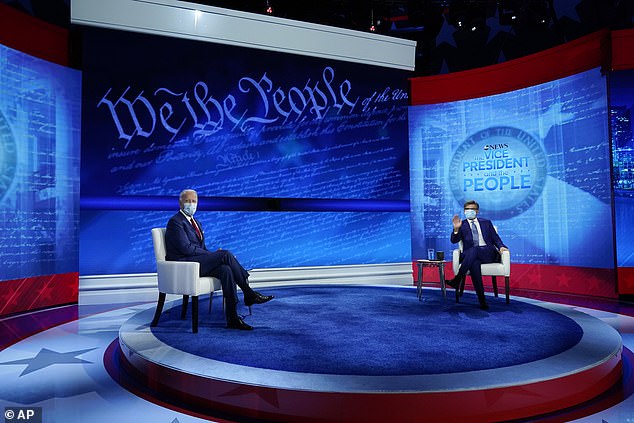 Trump claimed he had ‘a lot of fun’ at his town hall the night before, which took place in Miami.

Although he did not attack Guthrie by name, his meaning was clear when complained about ‘somebody going totally crazy.’

‘I had a lot of fun last night with that. That was a nice evening. Had a nice, pleasurable evening as I had somebody going totally crazy last night,’ he said as the crowd applauded. ‘I understand it worked out very well last night that’s what the word is I suppose. Another evening in paradise, I call it.’

Trump and Biden had dueling town halls Thursday night in place of the second presidential debate that was canceled after Trump refused to participate virtually.

He repeated his criticism of Stephanpoulos for not asking Biden about his son Hunter’s emails about the Ukraine during the ABC News town hall in Philadelphia.

And then he went on to echo an attack line first used by Rudy Giuliani, his personal lawyer, that Biden heads a crime family.

‘I bet you Hunter is the middleman, like a vacuum cleaner. He follows his father around. What a disgrace. It’s a crime family. You want to know something? It’s a crime family. Hunter Biden is a middleman. These people are amazing, these  middlemen. Hunter made no money until his father became vice president and now he’s like a vacuum cleaner,’ Trump said.

Giuliani used the hashtag ‘#BidenCrimeFamily’ in some of hits tweets about Hunter Biden.

Trump claimed he didn’t watch Biden’s town hall, which aired at the same time the president was participating in a town hall with NBC News.

But he complained Biden got easier questions than he did when he participated in a town hall meeting with Stephanopoulos and ABC News in September.

‘I didn’t watch Sleepy Joe last night, just wanted to see what he looked like, wasn’t looking too good. Was too painful, but I understand they did not ask him a question about this. Can you believe that? Think of it. And Stephanopoulos interviewed me and it was nasty, it was tough. Tough guy,’ he said. 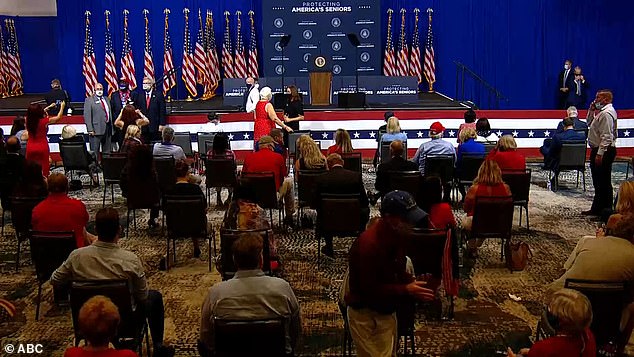 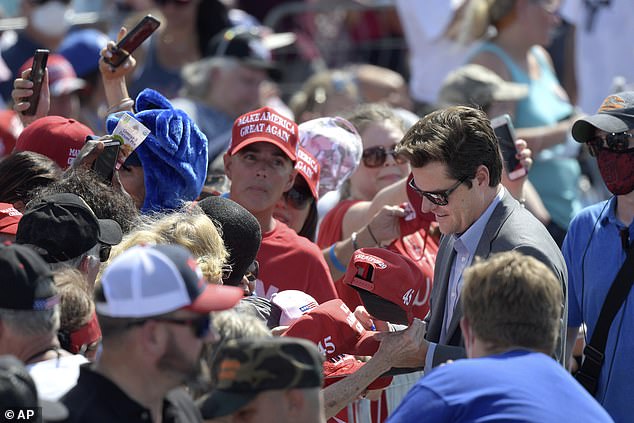 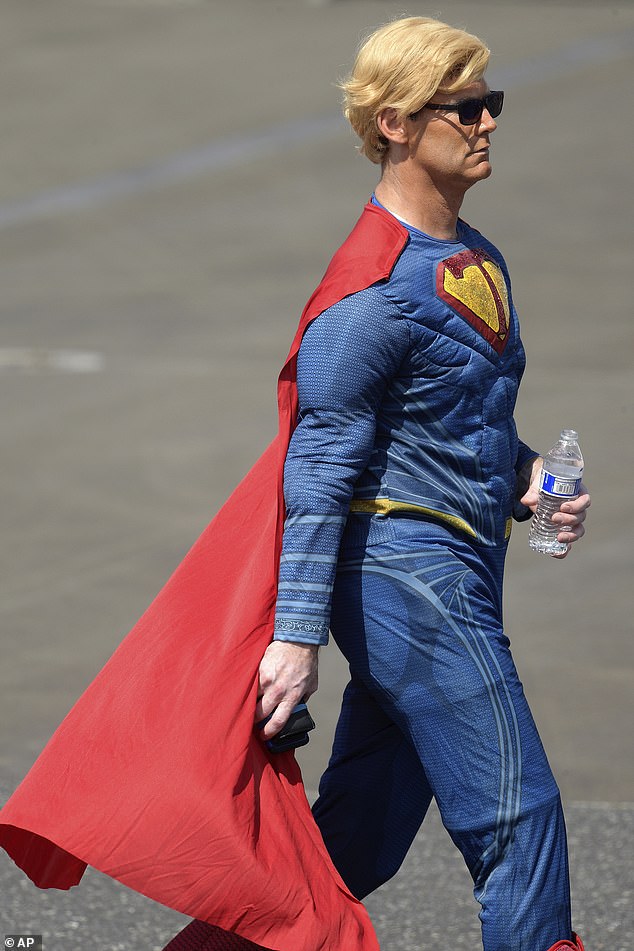 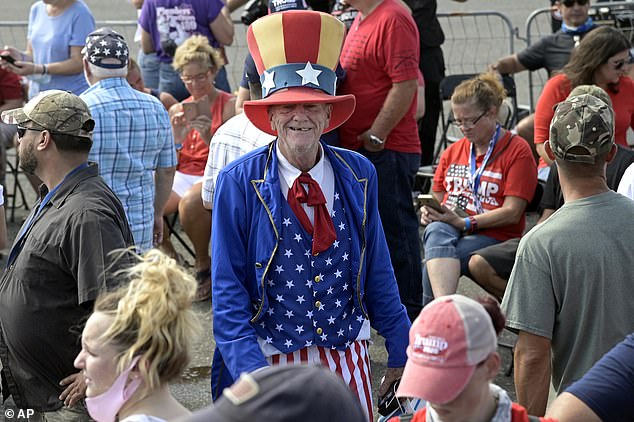 And he criticized ABC for not asking about Twitter’s decision to suspend accounts that posted a news story about the Hunter Biden emails, which allegedly came from a laptop Hunter owned and that was left at a Wilmington, Delaware, repair shop, whose owner gave a copy of the hard drive to Giuliani.

Earlier Friday, the president claimed Biden had a ‘very bad showing’ when he slammed ABC News for not asking about Hunter.

‘Sleepy Joe Biden had a very bad showing last night, despite the fact that @GStephanopoulos didn’t ask him any questions on his being a ‘corrupt politician’. Big Tech & Lamestream Media are working hard to hide this corruption!!!,’ Trump wrote.

Stephanopoulos and ABC News have not responded to the attack. 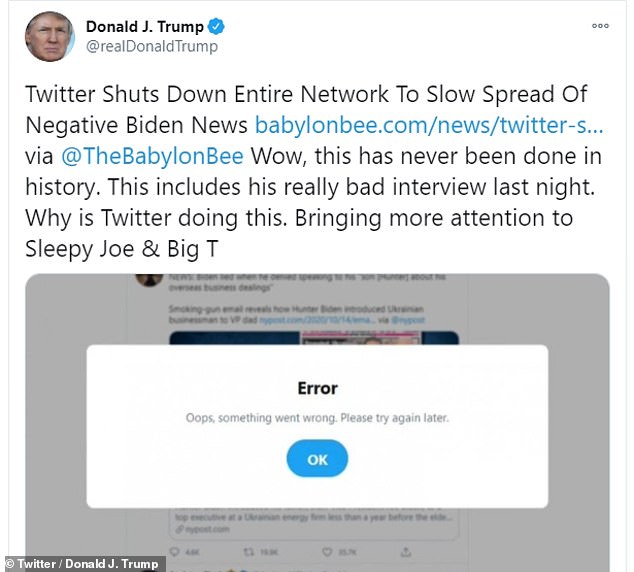 Joe Biden participated in a town hall with ABC News – going head to head with President Trump, who had one with NBC News; the town halls replaced the second scheduled presidential debate

Trump echoed criticism from conservatives, who complained that Guthrie interrupted Trump with a ‘question every 12 seconds’ while Stephanopoulos was accused of forgetting to ask Joe Biden about his son Hunter’s emails.

In his combative town hall, Trump faced a barrage of questions about his COVID testing, his taxes and his debt.

The president, however, tooted his own horn Friday morning, claiming he got ‘good reviews’ and, that thanks to ‘strong’ poll numbers, a Republican wave was coming on November 3.

The split-screen town halls Thursday night could not have been more different: while Stephanopoulos barely interrupted Biden, Guthrie asked more questions than the undecided voters the evening was dedicated to and challenged Trump repeatedly in a way the president doesn’t usually experience, given his preference for interviews with friendlier news outlets.

‘Let’s waste a whole show,’ he snapped at her when she asked him about the retweets on his Twitter feed, which have contained QAnon conspiracy theories and unproven claims Seal Team Six killed Osama bin Laden’s body double.

‘You’re not somebody’s crazy uncle who can just retweet whatever,’ Guthrie told him as she pressed him on the issue.

She kept the president on his toes with quick questions and repeated follow ups, pushing him to answer questions he tried to deflect away – which conservative backers of Trump said was proof of media bias.

They  voiced outrage about the president’s campaign event, accusing Guthrie of turning the town hall into a ‘debate’ and arguing that he faced a much tougher round of questioning than his rival.

Former White House press secretary and Fox News contributor Ari Fleischer likened NBC to an ‘interrogation’ and ABC to a ‘picnic’ as he accused Guthrie of repeatedly interrupting Trump.

‘I just switched to NBC since ABC is in a commercial. Savanah Guthrie has interrupted Trump in these 60 seconds more than Stephanopoulos has done to Biden in 40 mins,’ he tweeted.

‘NBC is an interrogation. ABC is a picnic.’

Staunch Republican and Trump ally Frank Luntz also accused Guthrie of interrupting Trump ‘every 12 seconds’ while Biden was able to speak uninterrupted over on the other channel.

But soon after the debate ended, Trump’s campaign boasted he had ‘defeated opponent’ Guthrie, saying he had ‘masterfully handled her attacks’.

During the evening, the president appeared to admit he owes more than $400 million to creditors, denied knowing about QAnon while praising them for fighting pedophilia, and declined to say if he was tested for COVID the day of his first presidential debate.

Unmentioned by either ABC or NBC or by Trump or Biden were Hunter Biden’s emails, which were revealed by Rudy Giuliani, Trump’s personal attorney, earlier this week and raised questions over his business dealings in Ukraine and China and whether he used his father to further them. Also unmentioned was the storm over Twitter banning distribution of stories about it on its platform.

The president accused Twitter of shutting down on Thursday to slow the distribution of the Hunter Biden story. He tweeted an article from a satire website titled: ‘Twitter Shuts Down Entire Network To Slow Spread Of Negative Biden News’ and added his own commentary: ‘Wow, this has never been done in history. This includes his really bad interview last night. Why is Twitter doing this. Bringing more attention to Sleepy Joe & Big T.’

He later clarified that his ‘Big T’ reference was to Big Tech and not to Trump.

‘Big T was not a reference to me, but rather to Big Tech, which should have been properly pointed out in Twitter’s Fake Trending Section!,’ he tweeted. 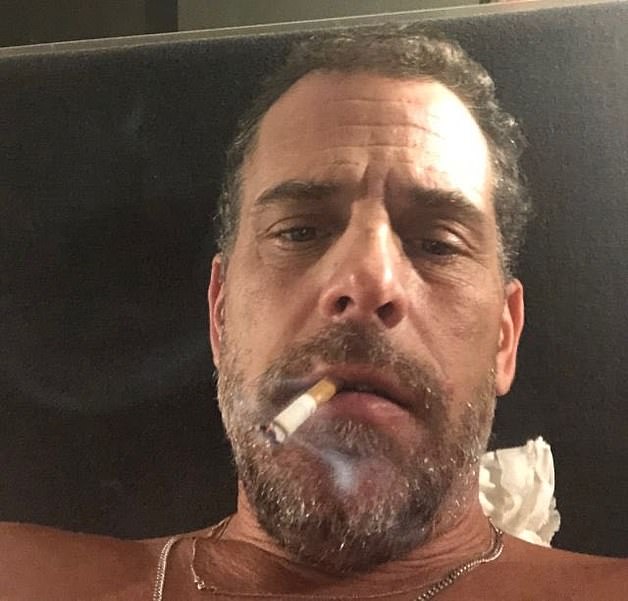 Here’s Hunter: The Democratic candidate’s son’s photos were part of the laptop which was obtained by Rudy Giuliani’s attorney and has now been released by the president’s lawyer

The links blocked by Twitter contained stories about emails between Hunter Biden and a Ukraine official who claimed he’d been introduced to Joe Biden. It also contained images of Hunter Biden.

The information was provided by Rudy Giuliani to the New York Post after a computer repair store owner said he’d found it on a hard drive.

The store owner said a man who he was unable to identify brought three computers into his store for repair last fall. He said he then made a copy of the emails and images on the hard drive, and provided it to the FBI and to Giuliani, Trump’s lawyer.

The original stories, which also also contained business email addresses, purported to expose corrupt dealings by Joe Biden and his son in Ukraine.

They plan to subpoena Dorsey to appear before the Judiciary Committee days before Election Day.

‘We have seen big tech, we’ve seen Twitter and Facebook actively interfering in this election in a way that has no precedent in the history of our country,’ fumed Texas Sen. Ted Cruz.

Twitter initially said the story violated policies on ‘hacked materials’ and on ‘personal and private information.’

‘Our communication around our actions on the NYPost article was not great. And blocking URL sharing via tweet or DM with zero context as to why we’re blocking: unacceptable,’ Dorsey said. He then linked to a statement from the company that said it was restricting the link because ‘personal and private information’ had been shared in the story.