DONALD Trump said the feds "will NOT be leaving" Portland until "there is safety."

On Thursday, the President took to Twitter to issue a warning to Gov Kate Brown after reports indicated the troops would be gradually withdrawing. 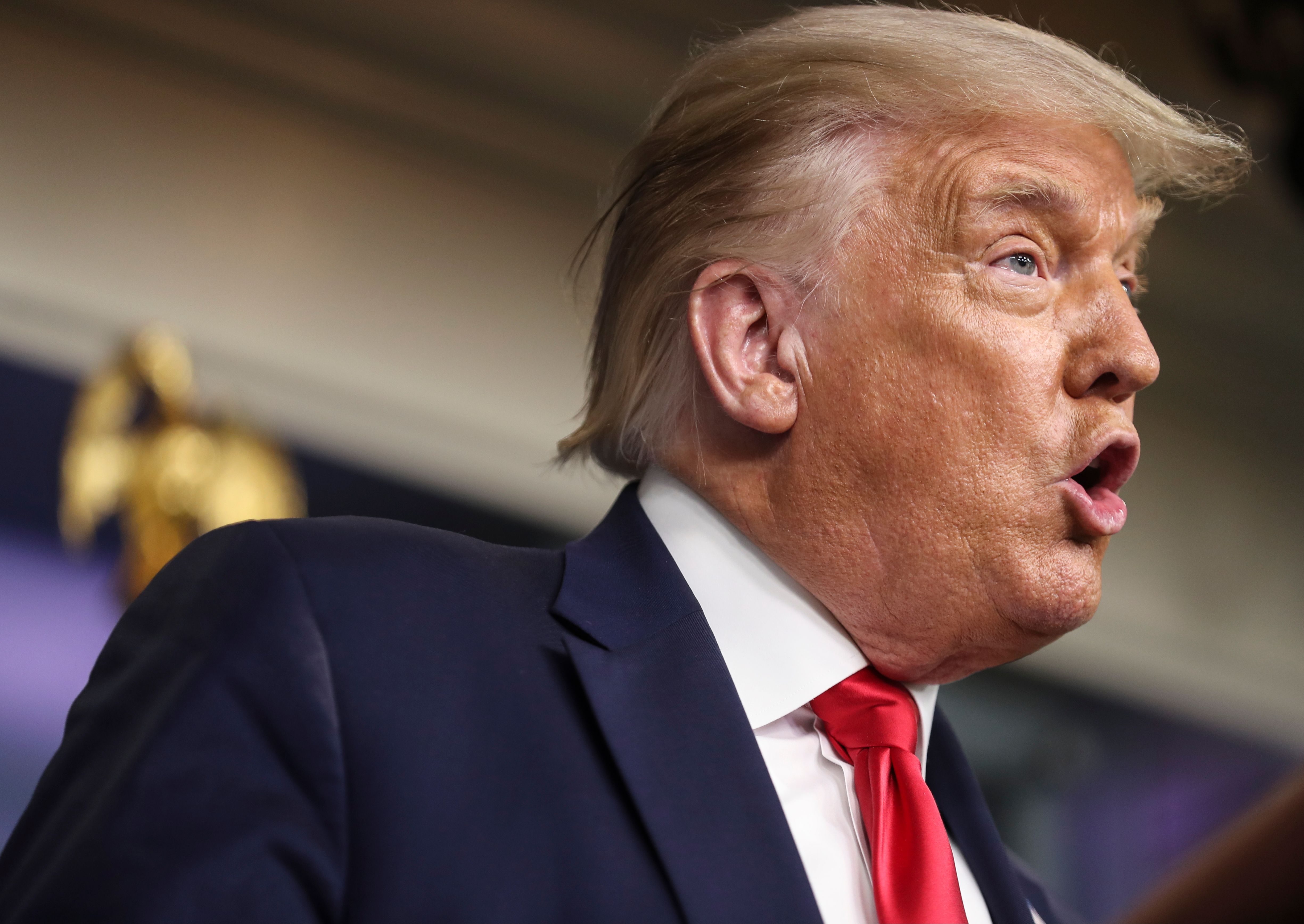 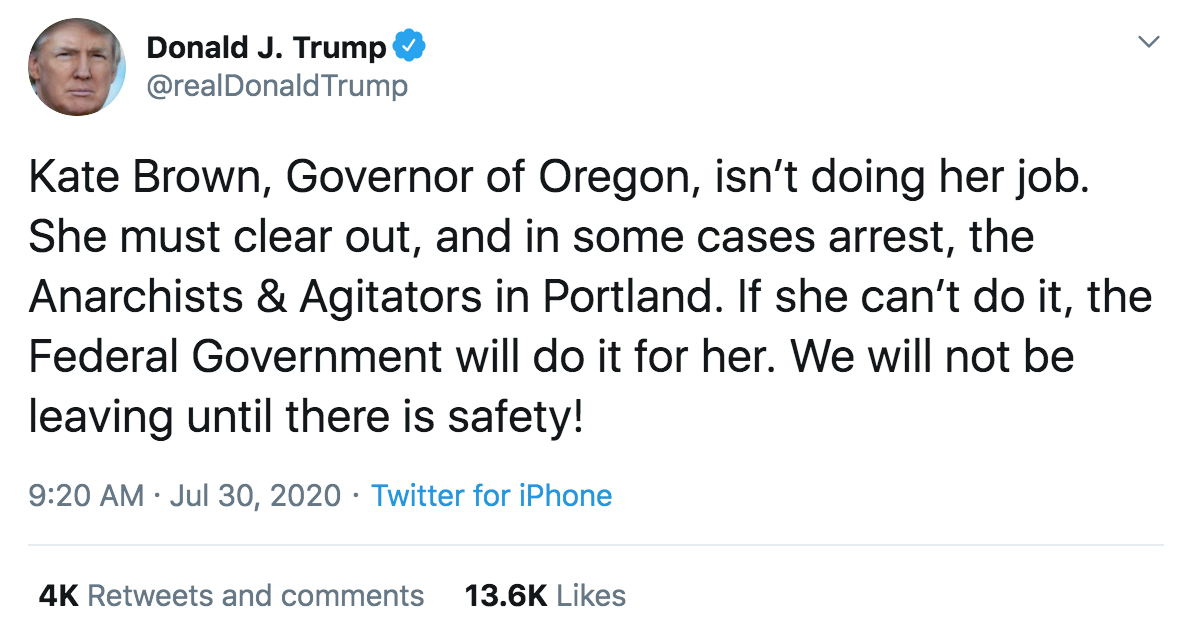 "She must clear out, and in some cases arrest, the Anarchists & Agitators in Portland. If she can’t do it, the Federal Government will do it for her. We will not be leaving until there is safety!"

His comments come after White House started talks with the Oregon governor’s office about withdrawing the agents sent to quell the violent riots.

An anonymous official told The Associated Press that the talks with the office of Democratic Gov Kate Brown are in the early stages and there is no agreement.

Yesterday, The New York Times reported that although these tactical teams will start phasing out from tomorrow, the acting secretary of the US Department of Homeland Security, said this was conditional. 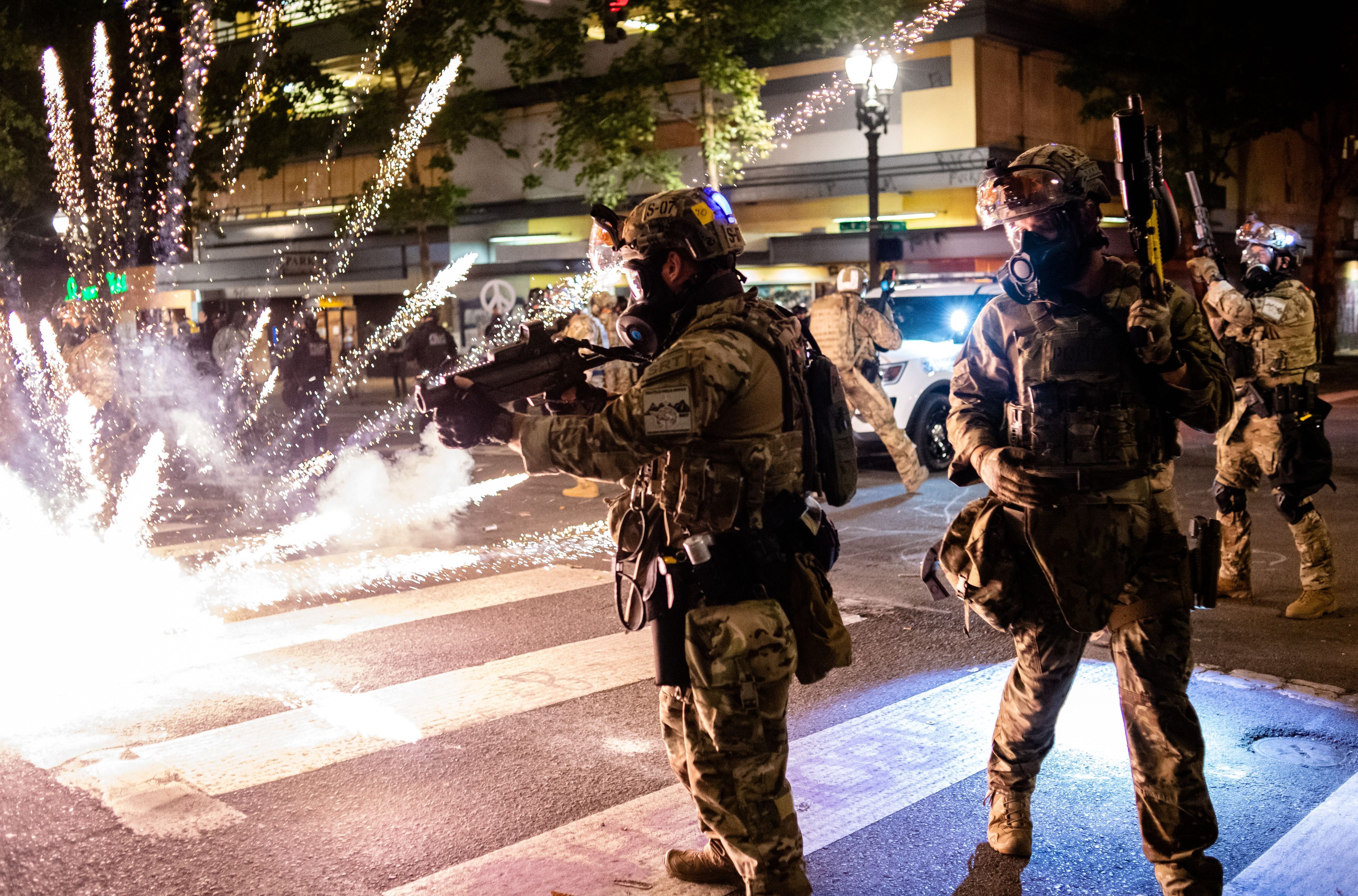 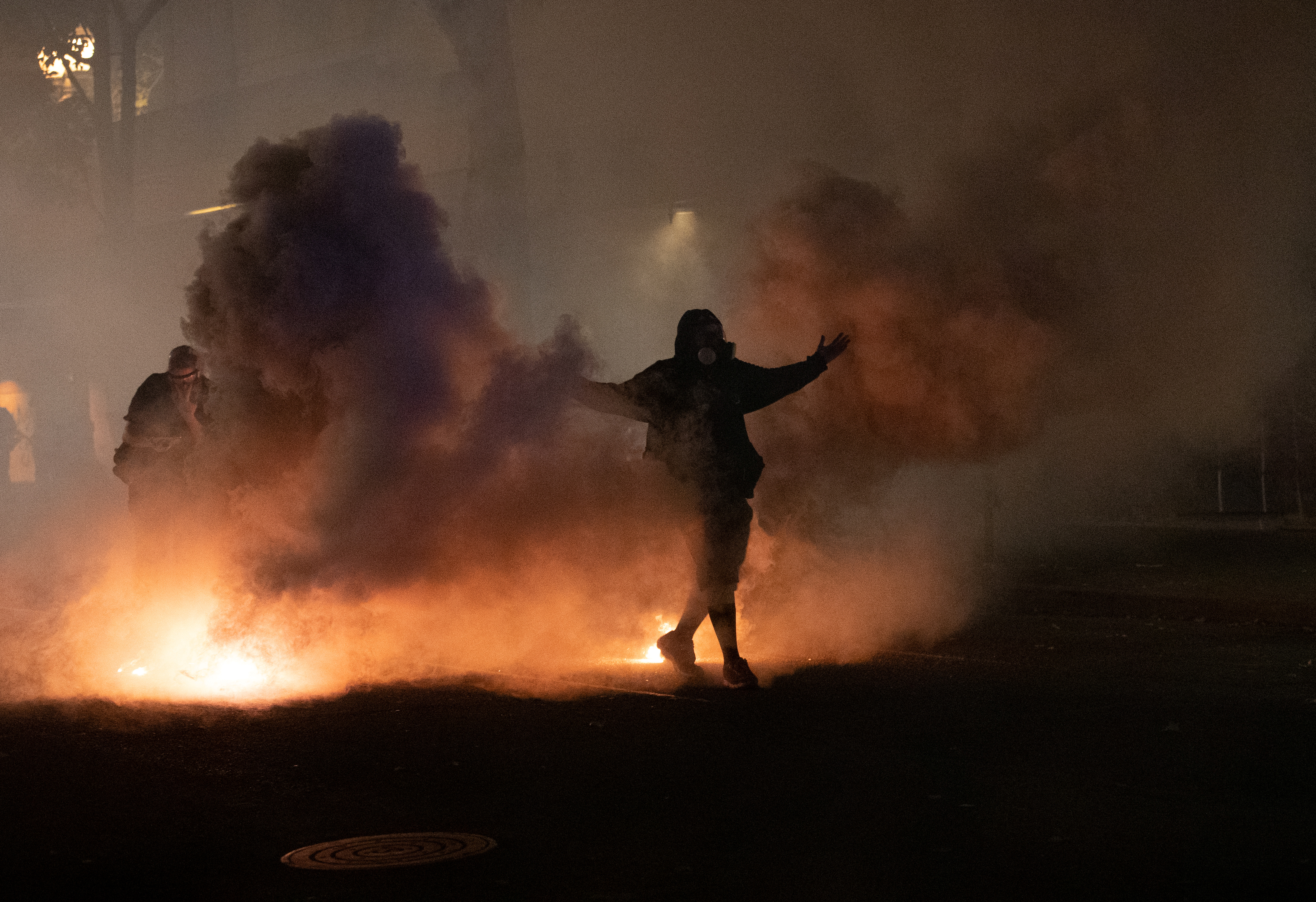 Chad Wolf reportedly said there would be a withdrawal of security personnel in Portland only if the Feds are confident that government property won't be attacked.

Donald Trump also weighed into the debate on Twitter this afternoon, touting the federal intervention.

"If the Federal Government and its brilliant Law Enforcement (Homeland) didn’t go into Portland one week ago, there would be no Portland – It would be burned and beaten to the ground," he wrote shortly after 1pm.

"If the Mayor and Governor do not stop the Crime and Violence from the Anarchists and Agitators immediately, the Federal Government will go in and do the job that local law enforcement was supposed to do!"

Earlier, Trump reiterated that the troops wouldn't be leaving until the city was secure. 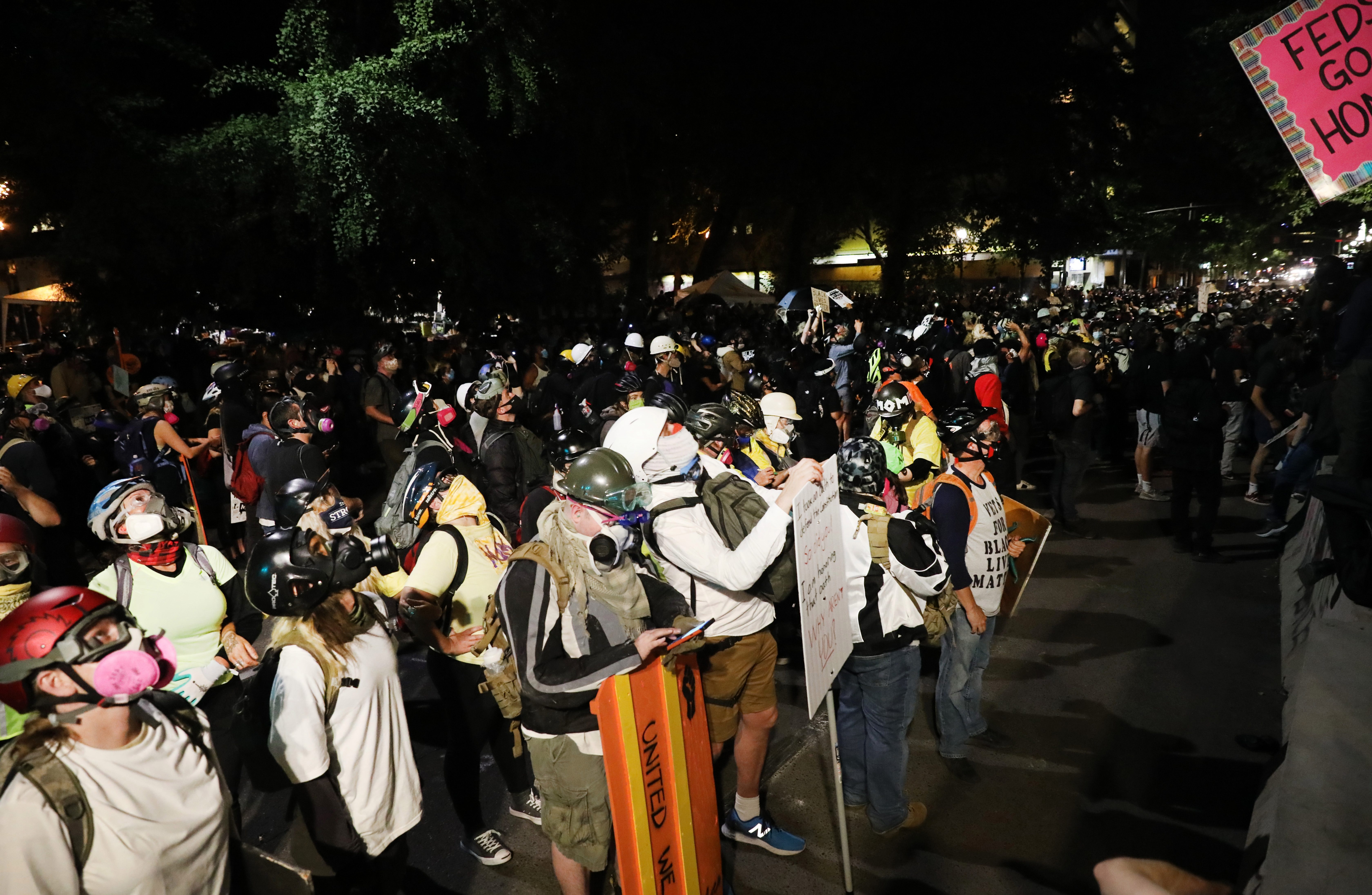 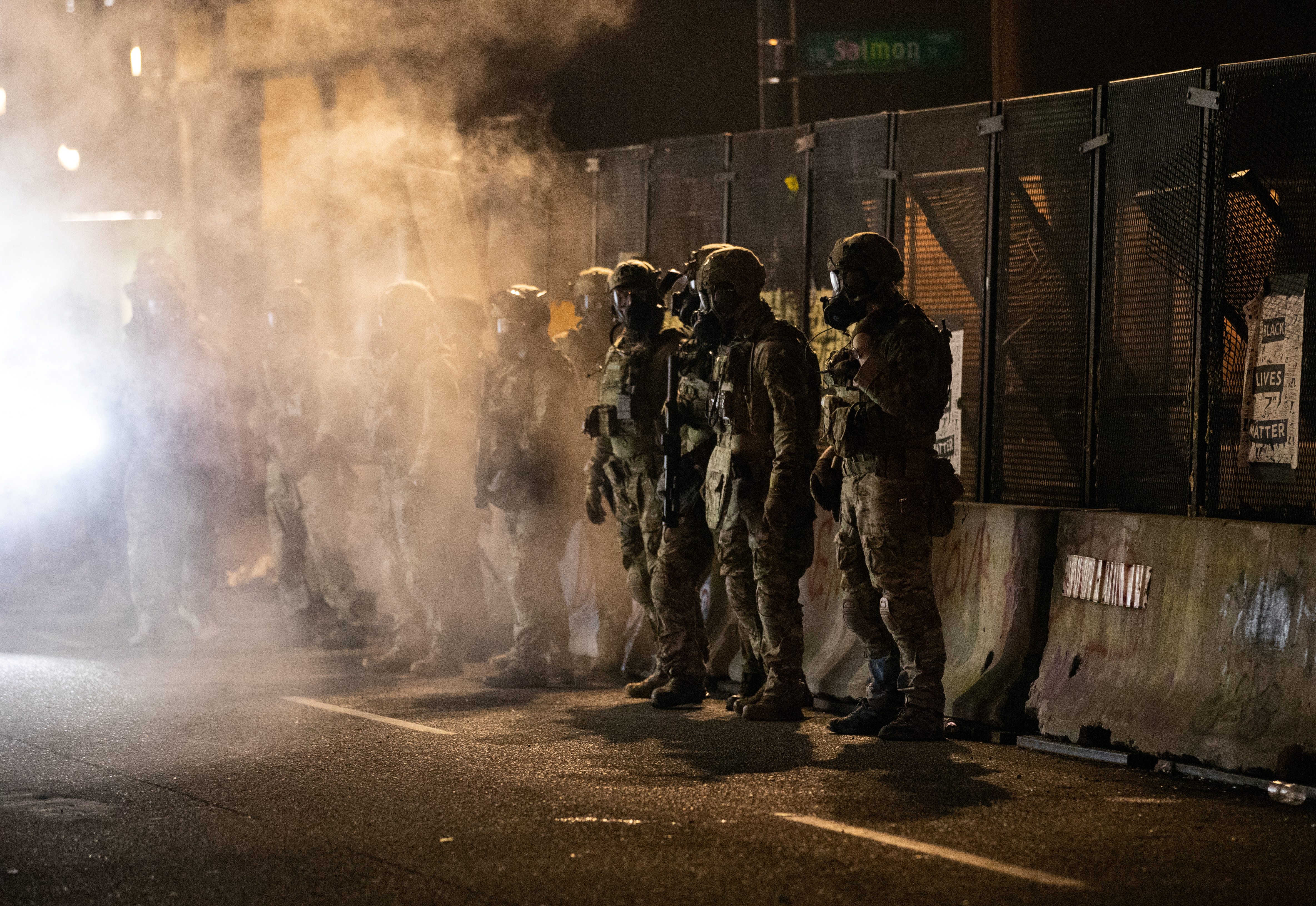 Meanwhile, the city of Portland is suing the Feds for blocking a bike lane outside the courthouse “$500 for every 15 minutes” the path has been blocked since a fence was set up February 22, The Washington Times reported.

The federal troops have come under fire for their aggressive dispersal of protesters as the rallies continue to wreak havoc on the city two months after George Floyd's police custody death in Minneapolis.

In the early hours of Wednesday morning, law enforcement officers again used tear gas to disperse people on the streets of Portland as loud booms filled the air.

Just a day earlier, the US Marshals Service and Department of Homeland Security were weighing whether to send in more agents.

Spokesman Drew Wade said the marshals were taking steps to identify up to 100 additional personnel who could go in case they were needed to relieve or supplement the deputy marshals who work in Oregon.

Homeland Security was considering a similar measure with Customs and Border Protection agents, according to an anonymous administration official.

On Tuesday night, there were reports of a firebomb exploding at the Mark O. Hatfield US Courthouse, while protesters fired mortars at police, who retaliated with pepper balls and tear gas, a KOIN journalist reported.

Portland Police Department confirmed that at around At 10:45 pm local time, people started a fire inside the fence and began shooting roman candles and fireworks towards the federal building.

"People also threw rocks, bottles, and other objects towards the Courthouse as well as climbed over the fence which protects the Courthouse," their statement read.

"Around this same time, a large fire was set where the Elk statue used to stand. This activity went on for several hours."

The news comes as the American Civil Liberties Union in Oregon filed a motion alleging that the Feds are attacking journalists and legal observers with riot-control munitions, despite a federal court ordering them to stop.

Last week, the US District Court in Portland temporarily blocked federal officers from targeting journalists and legal observers at the protests.

The ACLU asked the court to hold federal agents in contempt for violating the temporary restraining order and to ask Acting Homeland Security Secretary Chad Wolf and Acting Deputy Secretary Ken Cuccinelli to personally appear and show why they should not be sanctioned for contempt.

The motion was filed after US Attorney General William Barr said “violent rioters and anarchists have hijacked legitimate protests” sparked by Floyd’s death.

The ACLU maintains these federal agents acted unlawfully in Portland.