Turkey enters first nationwide lockdown: Erdogan launches three-week bid to force daily Covid cases below 5,000 so country will ‘not be left behind’ during tourist season

Turkey has entered its first nationwide lockdown to force daily Covid cases below 5,000 so the country will ‘not be left behind’ during tourist season.

People stocked up on groceries, filled markets and left cities for their hometowns or the southern coast on Thursday before the country entered its strictest lockdown of the pandemic.

The Turkish government had previously opted for partial lockdowns or weekend curfews in a bid to reduce the economic impact.

Under the new restrictions, residents are required to stay home except for grocery shopping and other essential needs, while intercity travel is only allowed with permission. Restaurants are allowed to deliver food.

It comes as public health experts urge UEFA to not allow thousands of fans to travel across Europe to attend the Champions Leagues final in Istanbul, where Covid cases are sky high. 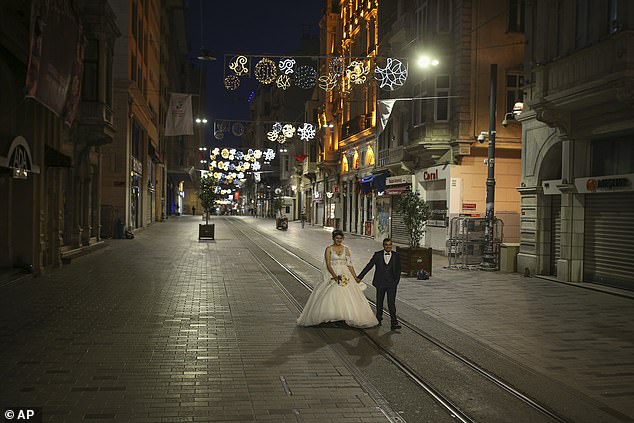 Newly-married couple Yasemin Tuna and Murat Targut pose for their photographer as they walk in Istanbul’s deserted Istiklal Street, the main shopping street in the city, after the start of the latest lockdown to help protect people from the spread of coronavirus 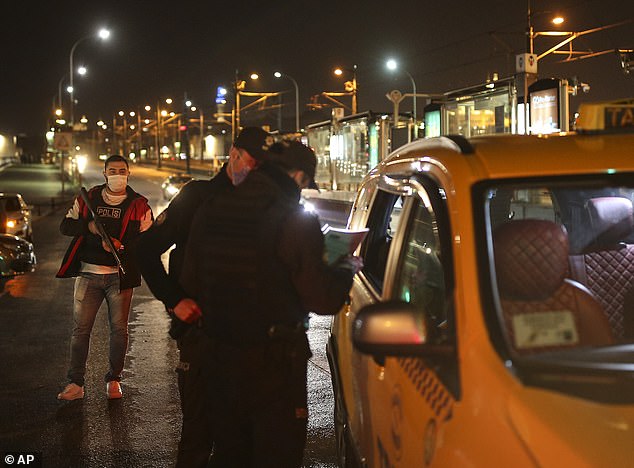 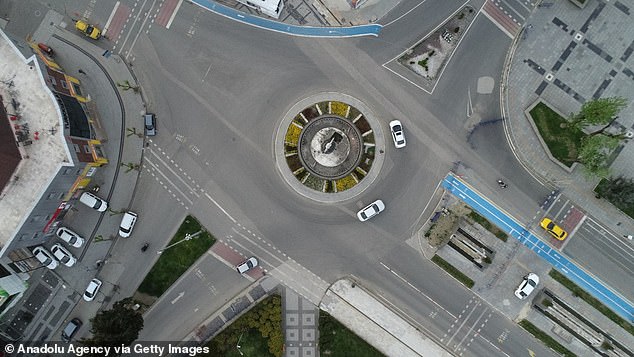 A drone photo shows empty streets following the start of the 17-day lockdown, which began at 4pm GMT (12pm EDT) and will last until May 17 amid soaring Covid-19 cases and deaths

Some businesses and industries are exempt from the shutdown, including factories and agriculture, health care and supply chain and logistics companies.

Many people left large cities such as Istanbul and Ankara to spend the shutdown – which spans the holy Muslim month of Ramadan, as well as the three-day Eid holiday – at vacation homes on the coast.

Bus terminals and airports were packed with travelers, while vehicles backed up in severe traffic at the entrance of the Aegean coastal resort of Bodrum, broadcaster Haberturk and other media reported.

People crowded shops to stock up on food and other supplies even though grocery stores will remain open.

Shops selling alcohol weren’t exempted and are being forced to close during the lockdown.

This month, Turkey’s confirmed Covid-19 infections averaged around 60,000 per day during the peak week. 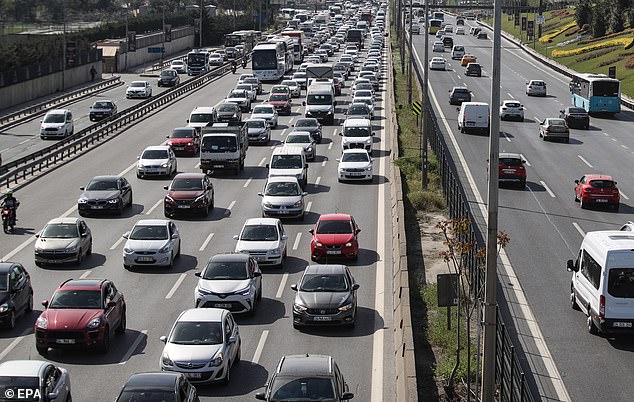 A view of a traffic jam before total lockdown in Istanbul, Turkey. People stocked up on groceries, filled markets and left cities for their hometowns or the southern coast on Thursday 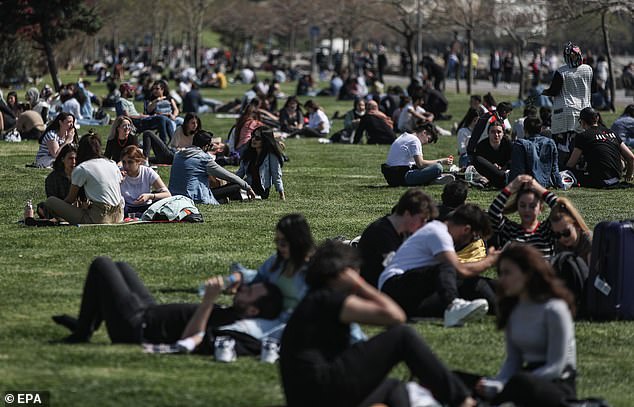 People enjoy sitting in the sun at a park near the Bosphorus before the full lockdown in Istanbul, Turkey, to drop daily Covid cases below 5,000 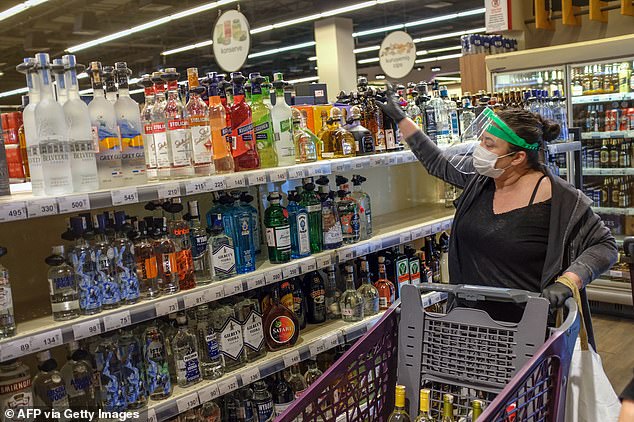 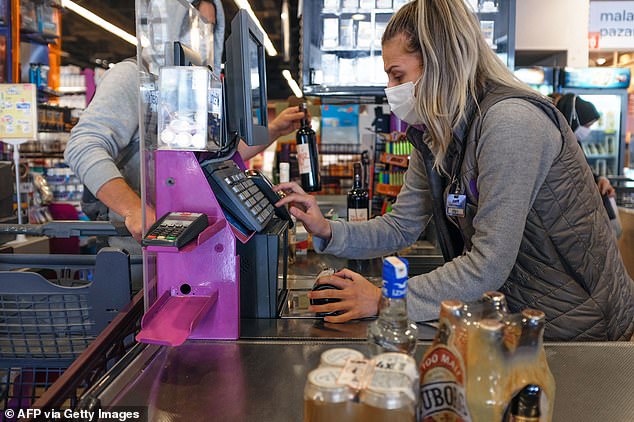 A customer checks out alcoholic beverages at a supermarket ahead of the lockdown. People also crowded shops to stock up on food and other supplies even though grocery stores will remain open

The country recorded its highest daily death toll on April 21, with 362 fatalities.

On Thursday, the country reported 37,674 new confirmed cases and 339 deaths. Turkey’s total death toll in the pandemic now stands at 39,737.

Erdogan said daily confirmed cases would have to rapidly drop below 5,000 for Turkey ‘to not be left behind’ as many European countries start reopening.

The country relies heavily on tourism to bring in foreign currency and wants to slow infection rates before the season starts.

Erdogan’s government has come under intense criticism for holding mass party congresses across the country, in breach of social distancing rules. Opposition parties have blamed his ruling party for the surge in cases. 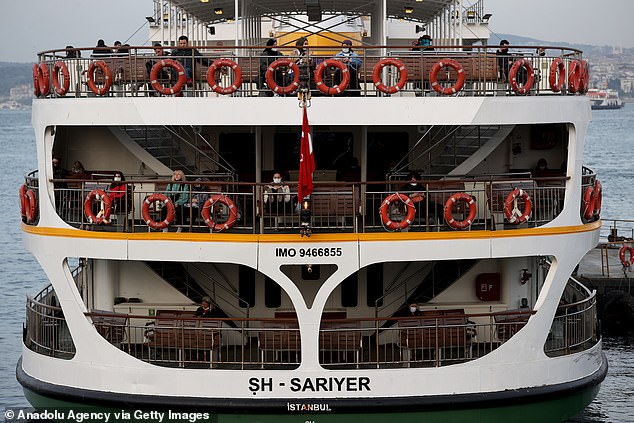 Tourists, who are exempt from the curfew, are seen at a nearly empty passenger ferry after the 17-day lockdown began in Turkey to stem the spread of Covid-19 in Istanbul 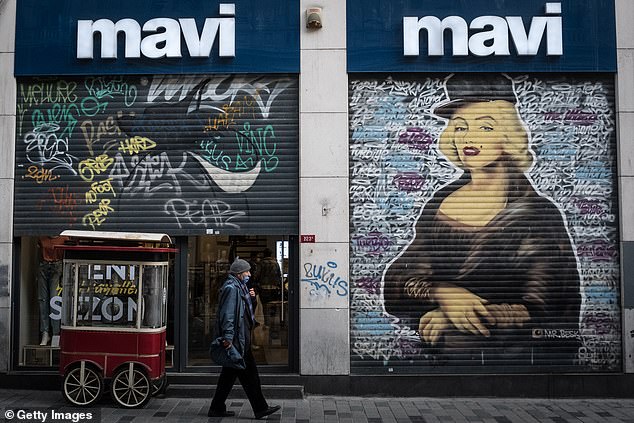 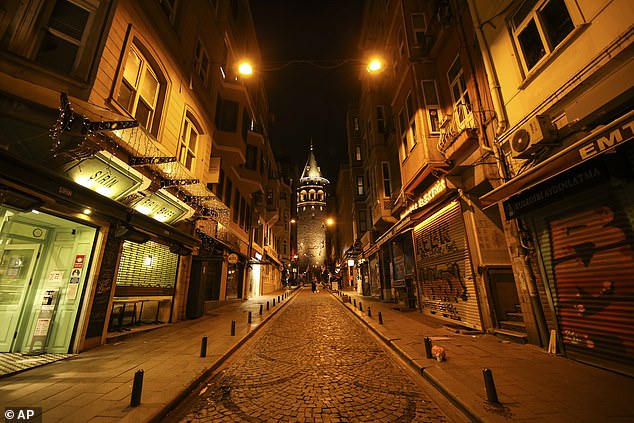 The deserted street leading to the iconic Galata Tower in Istanbul pictured on Thursday, after the start of the lockdown to help protect presidents from the spread of coronavirus 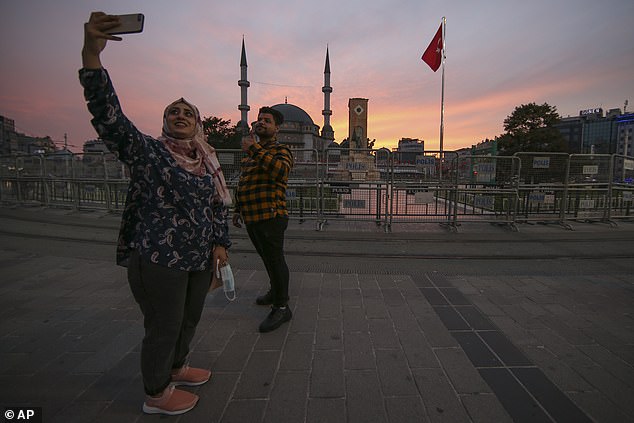 Top government officials were also seen attending crowded funerals while many businesses remained closed and the public was required to keep attendance at funerals small.

Meanwhile, UEFA has confirmed supporters will be allowed to attend the final at the Ataturk Stadium in Turkey.

With Chelsea and Manchester City now well placed to progress to the showpiece on May 29, English fans would face a 4,000-mile round trip to a country with one of the highest average daily infection rates in Europe.

While Turkey is not on the government’s ‘red list’ – countries from which travel to the United Kingdom is banned – the number of daily cases of Covid in Turkey is currently 16 times higher than in the UK, which has prompted experts to say ‘move the game to England’.