A primary school is urging parents to self-isolate after two pupils tested positive for Covid-19.

Staff at St Paul’s Church of England Primary School in Wibsey, Bradford, have written to parents advising them on the need to self-isolate if they have come into contact with the two schoolchildren, who are from the same household.

In a letter to parents on Wednesday, headteacher Cath Palmer reassured parents that the two pupils had fully recovered.

She said all procedures were being followed.

The letter said: ‘On Monday 1st June, we were informed that two children who have recently attended school, from the same household, had tested positive for Covid-19 over the weekend.

‘We are pleased to share that they are now well and have fully recovered. 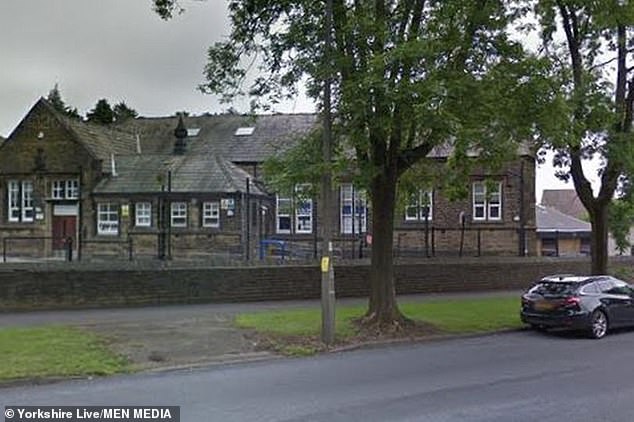 St Paul’s Church of England Primary School in Wibsey, Bradford, has written to parents to advise them on the need to self-isolate if they have come into contact with the two pupils

‘After liaison with Public Health England and the Department for Education we have followed our school response procedures: informing all parents of children and staff who may have come into contact with those affected and advised them of self-isolation guidance.’

Additional cleaning of the school was carried out on Monday and Tuesday this week as an extra precaution, she added.

Mrs Palmer added: ‘School is open to keyworker and vulnerable children from today, in the same way that it has been for the last eleven weeks, and the planned phased re-opening, starting with Year 6, is on Monday 15th June.’

The headteacher reassured parents that the school had been working with Public Health England.

‘We understand that these are concerning times for everyone but please be assured that we have worked very closely with Public Health England to ensure that all procedures have been followed; we have been guided by them throughout this period.’ 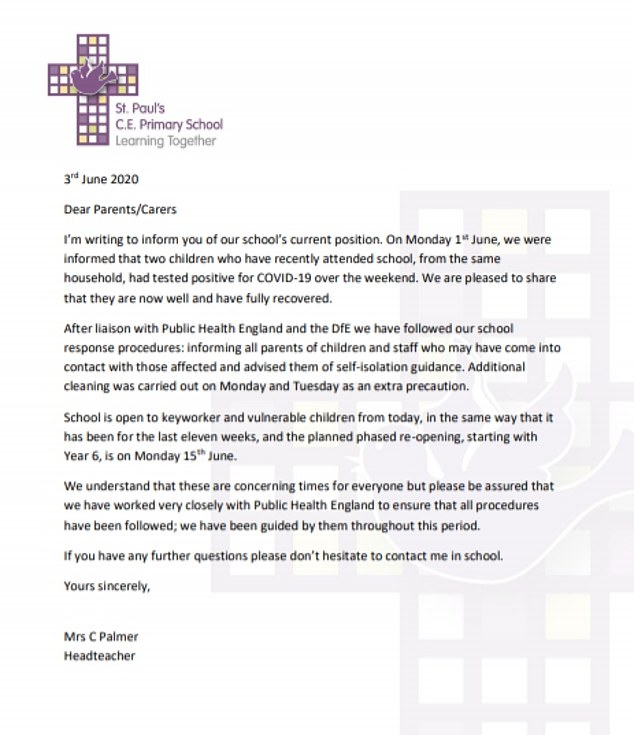 In a letter to parents on Wednesday, headteacher Cath Palmer reassured parents that the two pupils had fully recovered

‘We need to continue to observe social distancing and be very careful. The Government message has been very confusing.’

In a statement released through Bradford Council, Mrs Palmer said: ‘I can confirm that, following the advice of Public Health England, I have contacted the parents of children currently attending the school to alert them to the fact that 2 siblings who have been attending the school have tested positive for Covid-19.

‘We have followed all the correct procedures advised by Public Health England.’

Local councillor Ralph Berry, who represents Wibsey, told YorkshireLive: ‘This tells us that we are not through this crisis and that we need to be really listening to the Director of Public Heath in Bradford (Sarah Muckle).

‘We need to continue to observe social distancing and be very careful. The Government message has been very confusing.’

The news comes after another Bradford had to close after a member of staff tested positive for coronavirus.

Thorpe Park Primary, Idle, sent a message to parents on Saturday. The school is due to reopen to children of key workers and vulnerable pupils on June 8.

A spokesman for the Derby Diocesan Academy Trust confirmed the school had been closed ‘due to a number of staff having confirmed cases of COVID-19’.