The U.K. government is promising to crack down on an “appalling” fresh wave of illegal immigration that has seen hundreds of migrants crossing the English Channel in small boats — and the government is calling on France to do more to stop the crossings.

“The number of illegal small boat crossings is appalling and unacceptably high,” Home Secretary Priti Patel said in a statement. “The figures are shameful.”

At least 235 migrants in 17 boats landed or were picked up by British Coast Guard and Border Force boats on Thursday, surpassing last week’s record of 202 arrivals in one day.

Patel, a hardliner on immigration in Conservative Prime Minister Boris Johnson’s government, said that the government is working both to stop the boats leaving France, and also to intercept and return those making the crossings.

Patel in her statement warned, however, that the matter was “complex” and faces “serious legislative, legal and operational barriers.”

Successive British governments have for decades been struggling with the flow of illegal immigration across the Channel, both from migrants traveling on boats and those trying to smuggle themselves through ports of entry in the backs of trucks and other vehicles.

Immigration activists have said that many migrants have legitimate reasons to go to the country and the government should offer legal routes to get there safely. 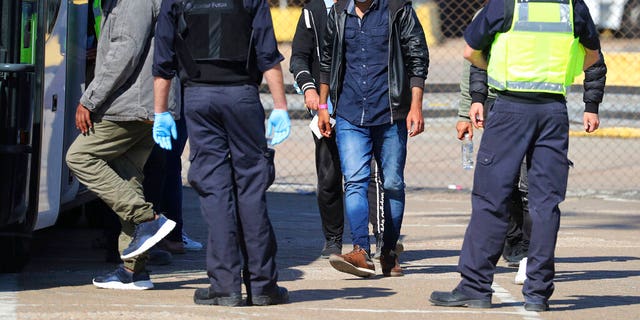 Border Force officers escort a group of men thought to be migrants to a waiting bus, after they were brought into the port city of Dover, England, from small boats, Aug. 7. There have been a number of small boat incidents over recent days, with some unseaworthy vessels trying to make the journey from France across The Channel, one of the busiest shipping lanes in the world. (Gareth Fuller/PA via AP)

Brexit Party leader Nigel Farage has been seeking to draw attention to the increase in migrants landing on British shores for weeks, posting videos of the boats and investigating hotels where migrants are reportedly being housed.

The summer weather has led to an uptick in those looking to make the crossings. The channel itself is about 20 miles at its narrowest point.

The U.K. Daily Telegraph reports that French authorities stop vessels but if migrants threaten to jump in the water, they withdraw as preservation of life is the priority. They then shadow the migrants to make sure they arrived in the U.K. safely.

Last month, Patel and French Interior Minister Gerald Darmanin agreed to set up a joint intelligence unit to stop the smuggling gangs who are helping the migrants make their journey into the U.K.

Chancellor of the Exchequer Rishi Sunak said on BBC Friday that the immigration minister will be in France next week to  “step up our collaborative efforts with our French allies.”

The Telegraph reported that more than 3,000 migrants  have reached the UK this year, compared with 1,892 for the whole of 2019.