Britain is ‘worryingly close’ to 100,000 new Covid infections per day, the country’s largest symptom-tracking study warned today despite Government data showing the outbreak is in retreat.

King’s College London researchers estimated there were 92,953 people falling ill with the virus on average across the UK last week, up 14 per cent on the previous seven days.

Cases are rising across all age groups, although the proportion of cases remains highest in under-18s with nearly 44,000 infected on any given day. There was also uptick in the rate of increase in the more vulnerable age groups 55 to 75, the researchers said.

The latest survey figures were based on data from around 43,000 lateral flow and PCR tests done between October 9 and October 23.

Professor Tim Spector, the epidemiologist who leads the study, warned that the Government’s figures were a ‘big underestimate’ and may be missing 40 per cent of cases.

The Department of Health’s daily reports only include cases confirmed by a PCR test — which are more reliable than lateral flow devices. They showed new infections fell for the fourth day in a row yesterday, dropping 10.6 per cent to 43,941.

SAGE member Professor John Edmunds, whose grim modelling in July predicted hospitalisations would have reached 3,500 a day by now, said the fall in cases may have been caused by rising immunity in children.

And the low numbers in the official figures have lead to Government sources claiming the chance of ministers activating their winter Covid ‘Plan B’ — which includes face masks, working from home and vaccine passports — is less than 20 per cent.

But Sir Patrick Vallance today called on Boris Johnson to go ‘hard and early’ and reimpose Covid restrictions at the first sign of infections rebounding in the UK. 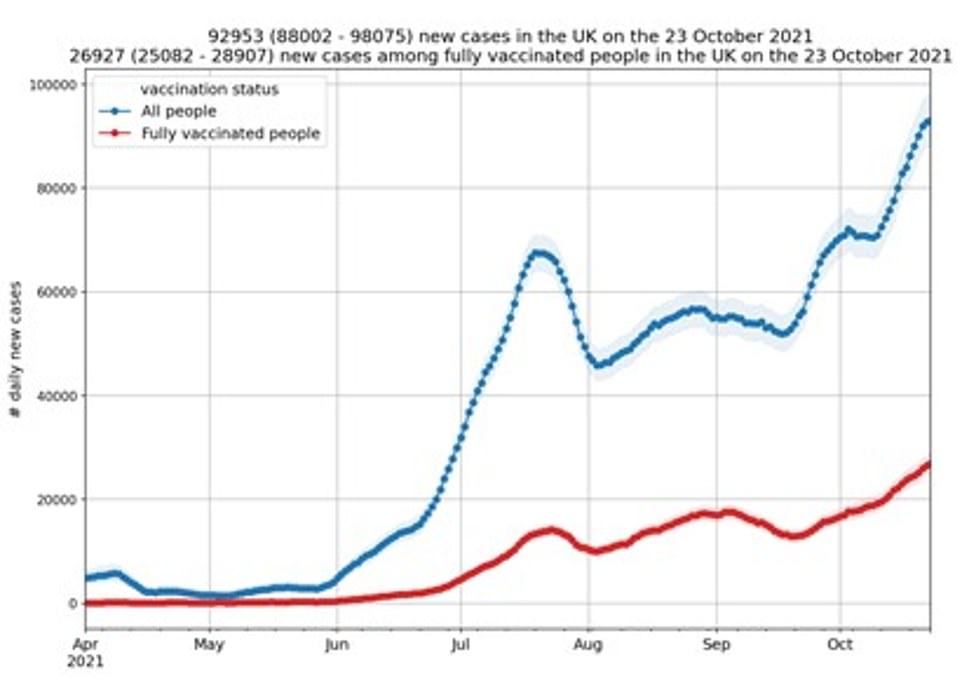 King’s College London researchers estimated there were 92,953 people falling ill with the virus on average across the UK last week, up 14 per cent on the previous seven days 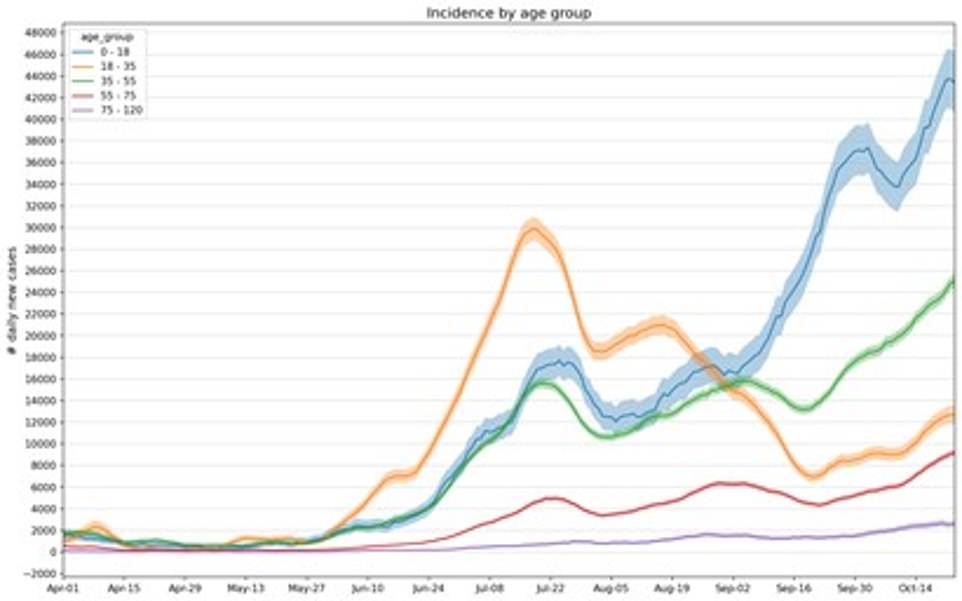 Cases are rising across all age groups, although the proportion of cases remains highest in under-18s (blue line) with nearly 44,000 infected on any given day 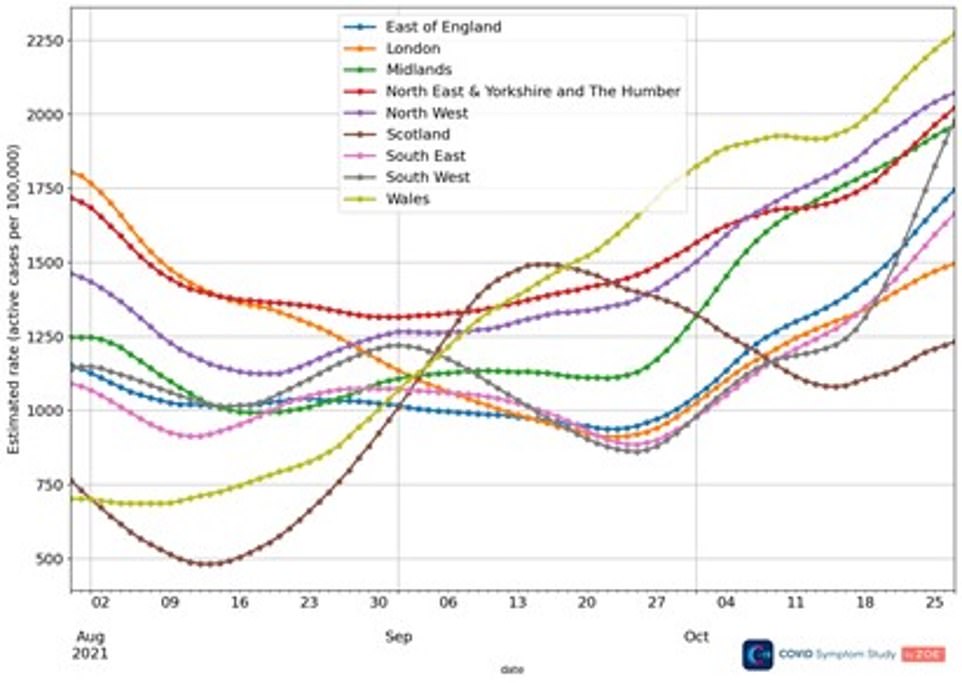 Cases are high in all regions of England and highest in the North West (purple line), where they are in excess of 2,000 per 100,000 people

Sir Patrick Vallance has called on Boris Johnson to go ‘hard and early’ and reimpose Covid restrictions at the first sign of infections rebounding in the UK.

Delivering the ultimatum over the airwaves this morning, England’s chief scientific adviser warned that the country remained in a ‘very uncertain phase’ of the pandemic.

He suggested that the Government’s winter Plan B — which includes face masks, working from home and vaccine passports — should not be taken off the table yet.

Warning against complacency, Sir Patrick told BBC Radio 4’s Today programme: ‘You need to absolutely be prepared (for plan B) and as soon as you start thinking “am I, or am I not going to do this? It looks close” is the time you need to push beyond your natural reluctance to do it and do it.

‘This is obviously something the Government will have to consider carefully but we need to be ready to move fast if that occurs.’

Sir Patrick gave the same warning to the Prime Minister at a Downing Street press conference last month, saying that failing to act will only lead to more restrictions being needed that will have to be imposed for longer.

Professor Spector said: ‘The ZOE data shows the UK could hit 100,000 new cases sooner than expected and with no sign of a Plan B or Plan C.

‘The ZOE figures are consistently higher than the official confirmed daily cases because we get results from various sources, including self-reported lateral flow tests that are under-reported officially.

‘The government raw figures report on PCR testing of the classical symptoms only, which miss around 40 percent of cases.

‘ZOE extrapolates the data from our sample to predict daily infections in the wider population.

‘With the confirmation of our estimates from the ONS’s fortnightly survey, it’s clear the government figures are a big under-estimate, and with the highest rates in Western Europe, there’s no room for complacency.’

The ZOE data estimates the UK R rate is around 1.1 — meaning the outbreak is growing — with an average of one in 56 people becoming ill with the virus.

In the double vaccinated population, cases continued to rise and it is estimated there are currently 26,927 new daily symptomatic cases in the UK, up 16 per cent from the 23,199 daily cases seen last week

And Covid prevalence remains highest in Wales, where more than 2,250

Professor Spector continued: ‘We now know that masks add a layer of protection, so wearing them on public transport and in crowded places is a good idea.

‘Avoiding unventilated crowded events is another, as well as working more from home.

‘Finally, staying at home and getting tested when you feel unwell is key.

‘There’s a lot of cold and flu out there making it harder than ever to tell the difference between a harmless cold or Covid.

‘However, there are some symptoms that are very telling of Covid, particularly loss of smell and taste. If you feel ill, always check by taking a quick and easy Lateral Flow Test, even if you think it’s just a cold.’ 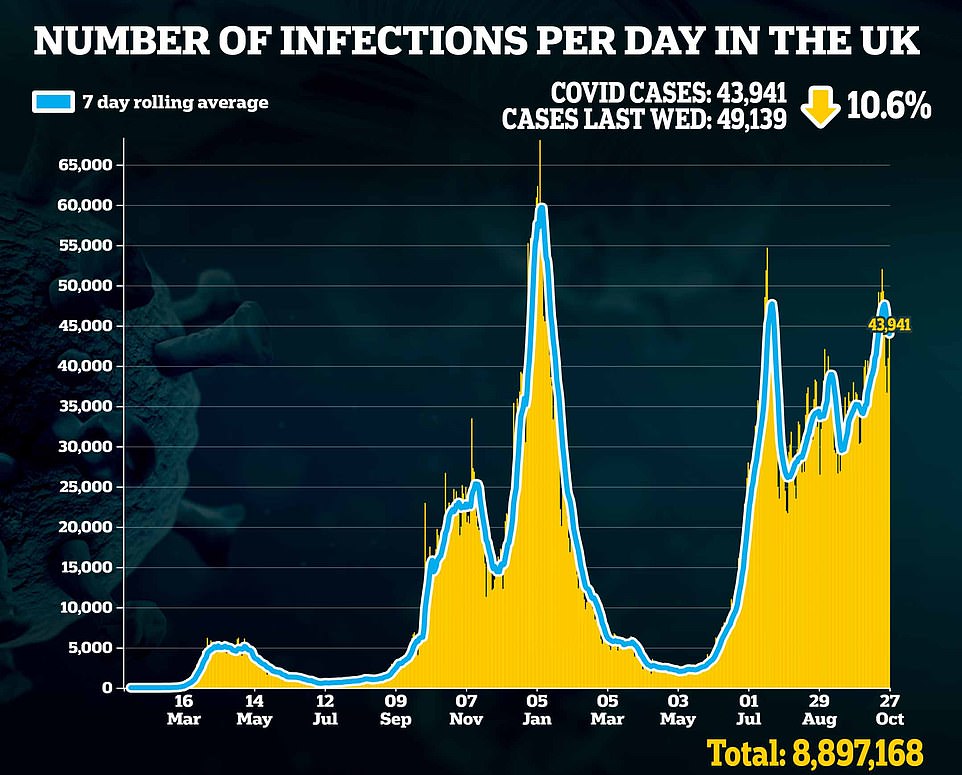 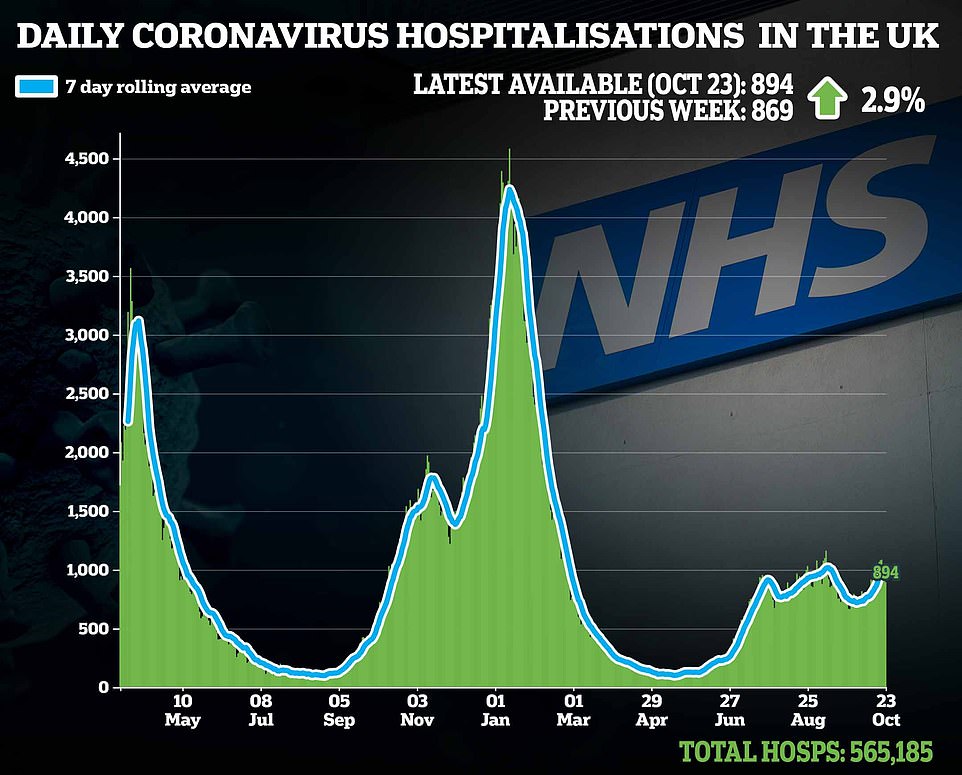 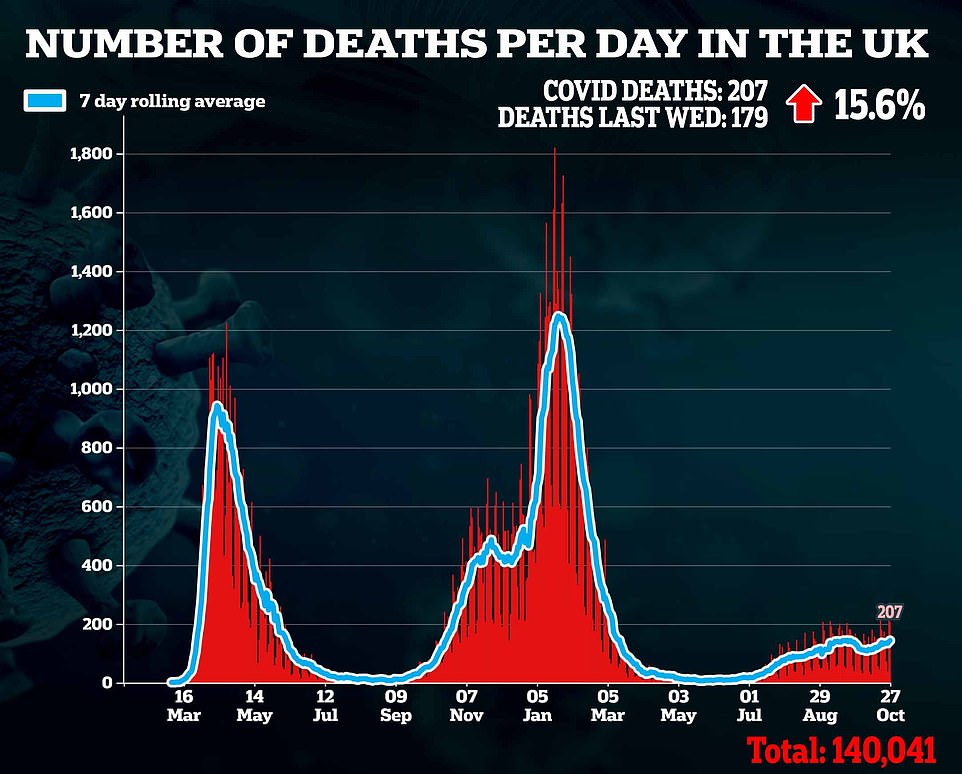 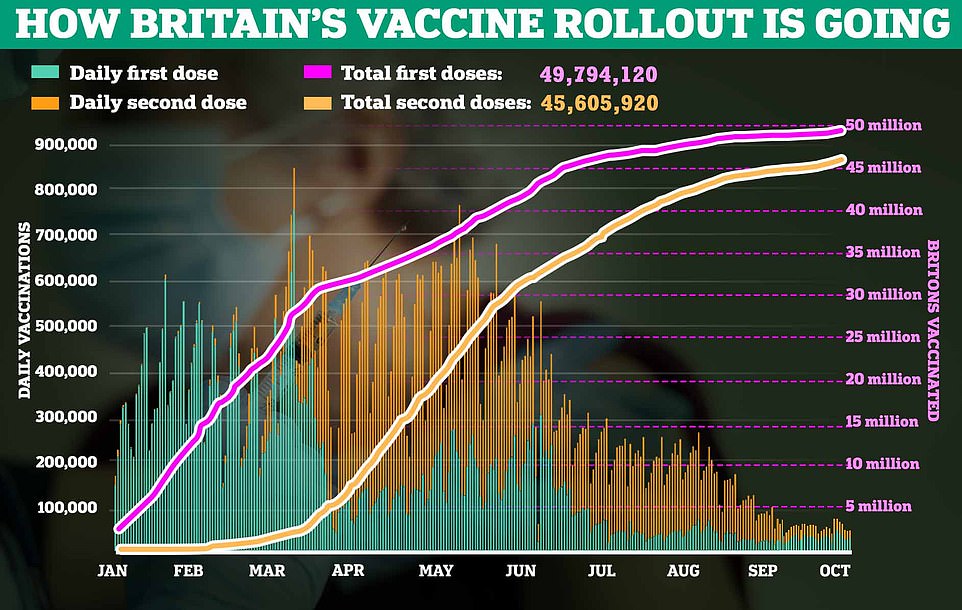 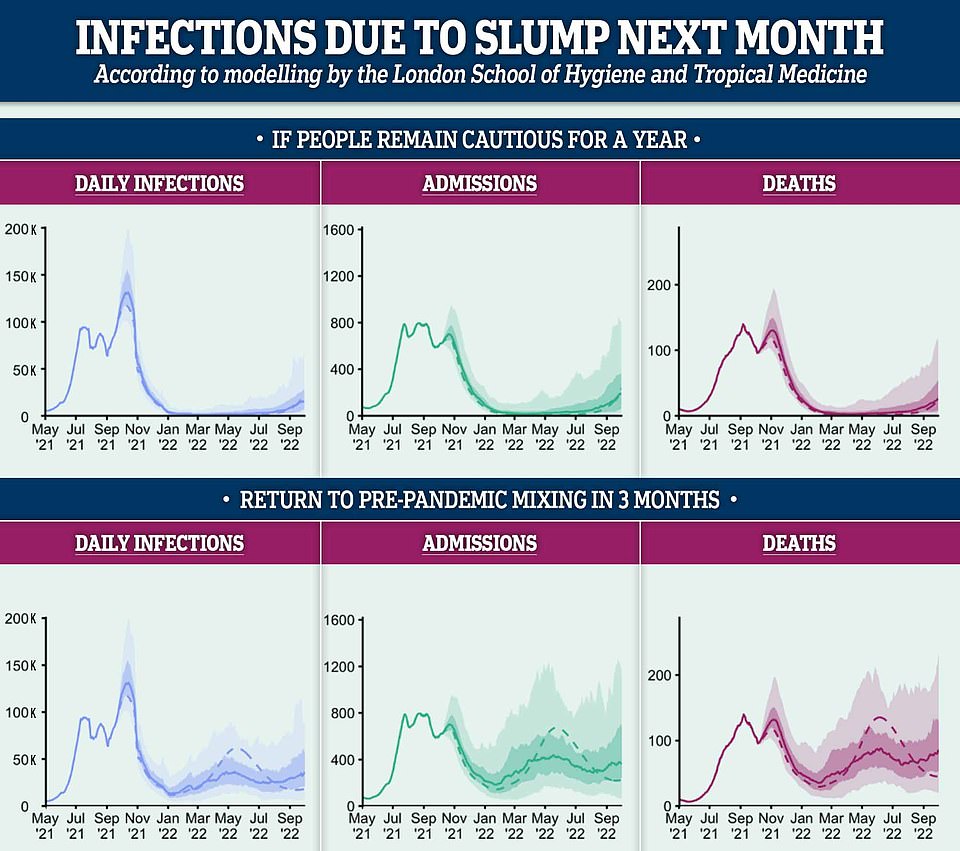 LONDON SCHOOL OF HYGIENE AND TROPICAL MEDICINE: These charts show the impact of returning to normal level of social mixing in three months (bottom) versus remaining cautious for a year – and the impact this would have on infections (left), admissions (middle) and deaths (right). The models show cases plummeting by November in both scenarios thanks to natural immunity but rising in spring (bottom) when vaccine protection is expected to wane 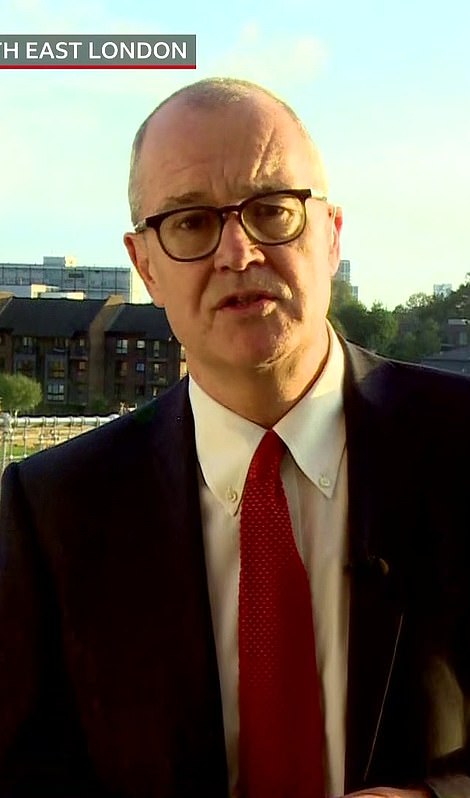 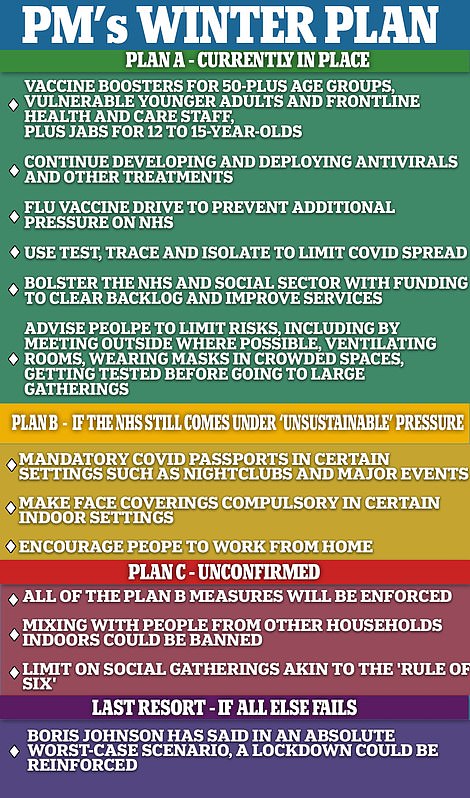 ‘Less than 20% chance’ No10 will activate Plan B now cases are going in the ‘right direction’, Whitehall sources say

The chance of ministers activating their winter Covid ‘Plan B’ is less than 20 per cent, Government sources claimed today — but face masks might make a partial comeback in schools.

Despite warning last week that daily cases may rise to 100,000 this winter, Downing Street is thought to have taken confidence from the fall in national infections in recent days and optimistic forecasts by SAGE.

Scientific advisers have told the Government that the epidemic could shrink naturally next month without curbs because of a combination of the booster vaccine rollout and growing natural immunity in children.

A Whitehall source told the Financial Times yesterday that the situation was now heading ‘in the right direction’, adding: ‘I reckon there’s a less than 20 per cent chance we’ll need to activate Plan B.’

Another senior Government official warned against being complacent because it is ‘too early to read a lot into the data’. But they conceded that ‘there is nothing to currently suggest we need to activate Plan B’.

Professor Edmunds yesterday said the spike in infections over the last few months was driven by ‘huge numbers of cases’ in youngsters. Health officials estimate as many as one in 12 children across England were carrying the virus last week.

But he said the surge in infections ‘will eventually lead to high levels of immunity in children’ which will see cases plateau and then fall, Professor Edmunds said. He added that it ‘may be that we’re achieving that now’.

Daily Covid infections in the UK breached the 50,000 barrier last week. It prompted medical unions, some scientists and Labour to call for Plan B — mandatory face masks, work from home guidance and vaccine passports — to be implemented immediately in a bid to control infections.

But optimistic modelling from SAGE has claimed infections may even slump to the 5,000 mark over the coming months, even without No10 caving into demands and resorting to virus-controlling interventions.

Scientists said a combination of booster vaccines, growing natural immunity in children and a drop in classroom mixing during the October half-term break would drag cases down.

Department of Health data suggests Covid cases have now peaked among school children, in a positive sign that they could soon fall in other age groups that they are passing the virus on to.

Its figures are published by when people actually took their test, rather than when they got their result, which experts say is more reliable because it accounts for reporting delays.