The head of the security company whose guards helped seed Melbourne's second wave of COVID-19 says infection control was so bad in hotel quarantine that it would have made no difference if the police or army had been in charge.

The boss of Unified Security, which provided the bulk of security guards across 13 Melbourne hotels, said the state government was trying to deflect blame for the failures of a program that allowed the virus to break out of quarantine. 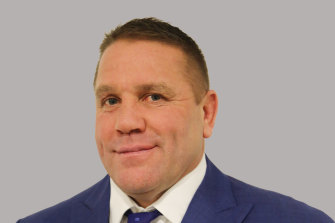 "The clear evidence from the hotel quarantine inquiry is that the primary cause of the outbreak was the appalling lack of infection-control protocols in the hotels and the confused and ineffective governance structure that meant no one knew who was in charge,” David Millward told The Age.

Police and Australian Defence Force personnel, Mr Millward said, would have been just as vulnerable as security guards if they had been employed in the program that was set up and overseen by Victoria's Department of Health and Human Services.

"COVID-19 does not discriminate. It does not pick and choose which uniforms it will infect," Mr Millward said, pointing to the more than 3500 healthcare workers who have contracted COVID-19 in Victoria.

However, Melbourne University infectious diseases professor Lindsay Grayson said police and the ADF had strict structures supporting them. The inquiry heard, by contrast, that the security workforce was highly casualised and relatively poorly trained. 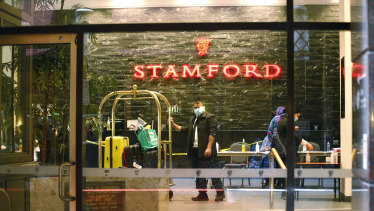 "That's a crucial difference – they have existing internal, rigorous structures which, despite being in many risky situations, their workforces remain safe," Professor Grayson told The Age.

In evidence to the inquiry, Professor Grayson said hotel quarantine should have been treated with the same rigour as an infectious diseases ward.

Mr Millward's statement to The Age and The Sydney Morning Herald is his first public comment on the program and comes as the inquiry prepared to hand down its interim report on Friday. The report will focus on recommendations for a new quarantine program, which could include advice on how hotels are staffed, paving the way for the return of international flights into Victoria.

A final report from Board of Inquiry chair Jennifer Coate is due by December 21 and it is expected to provide an explanation to Victorians of what went wrong and who should be held accountable.

Of the three companies contracted by the state government to supply security guards to the hotels, Unified ended up with the bulk of the security work, including at the Rydges on Swanston, the source of the most significant outbreak. It has also come under the most intense scrutiny.

But Mr Millward said the Department of Health had "failed to adequately consider and assess the risks involved in the program and to take responsibility for the program as the control agency".

"Rather than accept responsibility for this failure, the Victorian government, through various departments, attempted to deflect blame or responsibility to others. This is deeply disappointing," he said.

Unified, an Indigenous-owned company, was awarded more than $30 million in contracts between late March and July, earning it far more than rivals MSS and Wilson Security, even though Unified was the only one of the three not on the government's panel of pre-approved security suppliers. 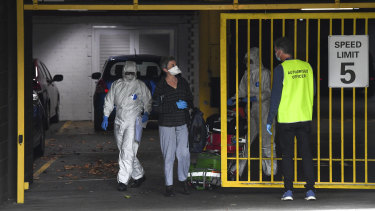 Contractors and a guest leaving the Rydges on Swanston back in July.Credit:Penny Stephens

Mr Millward said his company was selected because it had worked closely on employment programs with officials from Victoria's Jobs Department, which had been tasked with finding private security operators for hotel quarantine.

"Unified Security was a known and trusted company whose contact details were already held in the department," Mr Millward said. But the firm was never "handed" a $30 million contract, he said, because services were delivered on a fortnightly basis.

"If Unified Security was not up to the task or was not delivering the services to the required standards, the department could have quickly and simply discontinued using us. We were only as good as our last fortnight's work."

Six of Unified’s subcontracted guards, along with a nurse and a hotel employee, caught the coronavirus while working at Rydges in late May. Genomic sequencing data linked 90 per cent of Victoria’s devastating second wave back to Rydges, while just under 10 per cent was traced back to Stamford Plaza, though four times more staff (26 guards subcontracted by MSS) contracted the virus there.

The Health Department said in its submission to the inquiry that responsibility for the program was shared between the Jobs Department and the agencies involved in running hotel quarantine.

In closing submissions, counsel for the inquiry said poor use of protective gear and lack of social distancing by the guards, poor training of staff and "drastically inappropriate cleaning measures" were likely behind the Rydges outbreak.

The inquiry heard better cleaning and faster quarantining of all staff at the Stamford in the wake of the outbreak more effectively prevented spread into the community.

Under their contracts, it was a responsibility of security firms to train staff in the use of protective gear. In closing submissions, counsel assisting the inquiry said it was inappropriate to outsource this obligation to the security companies.

However, the Health Department cautioned the inquiry against finding the outbreaks in hotel quarantine caused 99 per cent of the state’s second wave.

How COVID-19 was transmitted from returned travellers to staff and the chain of events that led to the spread in the community has not been determined, the department said.

"It would be unsafe to make a finding that 'the movement of the virus through the barriers of quarantining is responsible for some 99 per cent of the recent COVID-19 infections in Victoria'," the department submitted.