‘If anything she was at fault’: Unrepentant couple who knocked six-year-old off her bike defend their actions and blame HER for ‘barging into them’

A couple who knocked a six-year-old girl off her bicycle when they failed to allow her space on a footpath insisted today she was at fault and they were ‘not to blame’.

Joanne Crampton, 45, and her husband Ian, 46, claimed the girl ‘barged’ into them while they were walking their dog on the Blackwell Trail in Derbyshire.

Mrs Crampton, of nearby Huthwaite, Nottinghamshire, told The Sun Online: ‘People have vilified us, it’s been dreadful but it’s been blown out of all proportion.

‘If anything the little girl was at fault, not us. She barged into us. We were out walking our dog and we didn’t hear her ringing her bell.

‘We’ve done nothing wrong but people on social media are making us think we have. We’re not to blame.’

The couple contacted Nottinghamshire Police after the video was shared by the girl’s mother Michelle Prost, but officers decided against prosecuting them.

The child was riding down the path on the Blackwell Trail with her father shouting ‘excuse me’ to Mr and Mrs Crampton, who live ten minutes away from the area.

However the couple did not move and the girl tried to cycle inbetween them, before falling off her bike and hitting Mr Crampton on his leg. 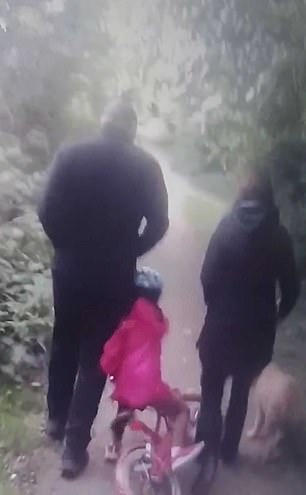 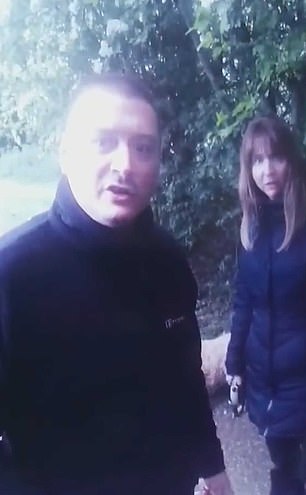 The girl could then be heard crying loudly before Mr Crampton kicked her bike and walked off.

Video footage of the incident went viral after Ms Prost posted it on Facebook. She was inundated with messages of support, later saying she had reported it to police.

But a Nottinghamshire Police spokesman said: ‘We have reviewed the footage and do not believe this was a criminal offence.

‘The couple involved called us about the incident and we are satisfied that what took place was a misunderstanding between the two parties.

‘They have both been updated as such. We reiterate our former messaging about being extra aware of our surroundings and considerate of others. 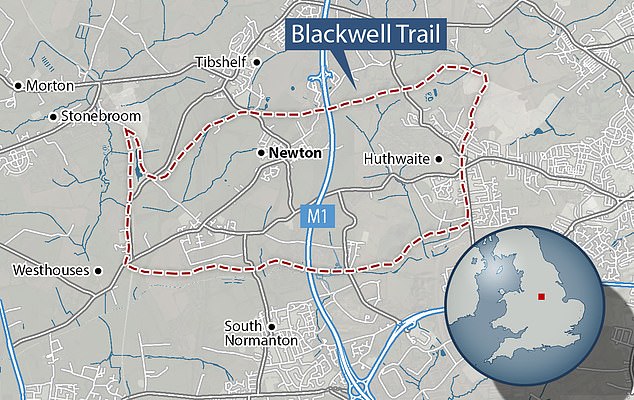 A map showing Blackwell Trail in Derbyshire, where the incident took place earlier this week

‘More people are now walking, cycling and jogging along our pathways in line with the government’s new guidance, all going at different speeds and we’ve got to share our open spaces with social distancing in mind.’

The force had previously said it was ‘keen to speak to anyone who may have seen what happened or recognises those in the footage’.

The footage shows the girl riding down Blackwell Trail earlier this week with her father.

After the collision her father confronts Mr Crampton and angrily shouts ‘I said excuse me several times’ before the two men row about what happened.

The girl can be heard crying as Mr Crampton kicks her bike while walking away. Her mother said her daughter had been ‘traumatised’ by the incident.

She claimed that Mr Crampton had retorted ‘so f***ing what’. 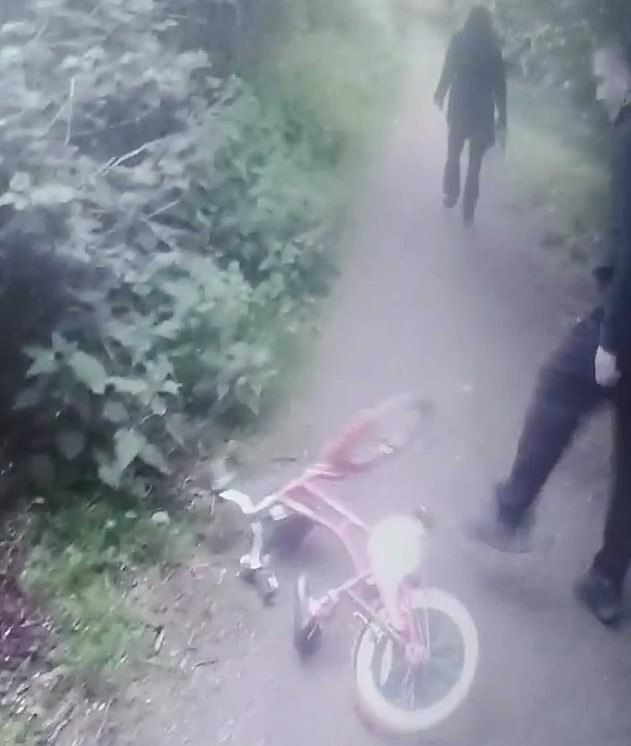 The six-year-old girl can be heard crying as the man kicks her bicycle, before walking away

Ms Prost posted the video with the caption: ‘So this couple purposely ignore my six-year-old daughter ringing her bell and saying excuse me. She starts screaming and wobbling in panic.

‘The man turns and looks at my daughter, then the couple look at each other but continue to ignore her on purpose. She then rides into them in panic.

‘She is new to going on bike rides, this has really upset her. The man gets verbally abusive and says ‘so f***ing what?’.

‘What an awful man. My daughter is traumatised. They clearly have an issue with cyclists and were making a point of not moving.’

She later wrote: ‘I’m so mad about how shaken up she is hours later. Absolutely disgusting to make a little girl feel threatened’.