An evacuation order for a Latrobe Valley town inundated by floodwater has now been lifted, but more than 110,000 homes across Victoria are still without power as the clean-up from wild weather on Thursday continues.

Major flood warnings from VicEmergency are still current for the Yarra River from Millgrove to Coldstream and for the Thomson River from the Cowwarr Weir to Wandocka in the state’s east. 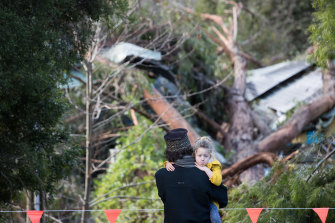 Six-year-old Mirrah looks at the damage after three huge trees landed on the roof of the Monbulk Aquatic Centre.Credit:Jason South

Schools are set to re-open in metropolitan Melbourne on Friday following the easing of coronavirus restrictions. However, several primary and secondary schools, as well as kindergartens in towns such as Frankston, Healesville, Kyneton and Trentham, have been closed due to the severe weather, according to the Department of Education.

CitiPower and Powercor chief executive officer Tim Rourke said there was now just over 12,000 people on his network without power, and most should have electricity returned by Friday night. 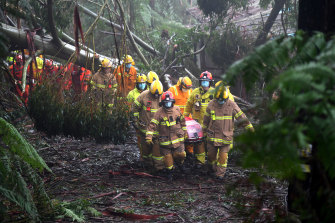 A woman is rescued from her house after a tree landed on it, causing significant damage in Olinda on Thursday.Credit:Joe Armao

“The majority of our people – apart from maybe 1000 – will be back on supply this afternoon, everyone will be back on our networks by midday Saturday,” he told 3AW Mornings.

Mr Rourke said one of his employees, Andrew McArdle, who has lived and worked in Kyneton for more than 30 years had seen “nothing like this devastation”, with trees everywhere.

Another 100,000 people are without power in Victoria’s east, according to AusNet.

Traralgon residents have been told they can return to their homes after being evacuated due to rising water, with the Latrobe Valley receiving just 4.4mm of rain since 9am on Thursday.

The Traralgon Creek received around 250mm of rain on Wednesday night, sparking the evacuation order.

“I cried the whole way out … water was up to a metre high,” Jemma Moran told 3AW.

Residents in Gippsland told have been they will be without power until at least Sunday, with callers to 3AW saying parts of the Dandenong Ranges such as Upwey are also still without electricity.

A man, possibly aged in his 60s, was found dead inside a submerged car in Woodside on Wednesday. The circumstances around his death are still being investigated and police will prepare a report for the coroner.

Victoria Police hold concerns for a missing 20-year-old woman in Simpson, around 200km south-west of Melbourne, due to the extreme weather.

Nina left her home at about 8.20am Wednesday and was expected to arrive at her workplace in Glenfyne about thirty minutes later.

“Police and family hold serious concerns for Nina’s welfare due to the extreme weather conditions which has caused the roads on her usual route to flood,” a spokeswoman for Victoria Police said.

The 20-year-old was driving a 2013 white Toyota Hilux utility bearing the registration 1NM 6MQ when she went missing.