More than 20,000 new car owners in Victoria will get a $3000 government subsidy if they buy a vehicle with zero emissions under a new plan.

The subsidy is part of a new $100 million Victorian government emissions package, to be funded by a new road user charge which is yet to be introduced.

On Saturday night, the Andrews government also outlined an ambitious plan to have half the cars sold in Victoria be zero-emissions vehicles (ZEVs) by 2030. 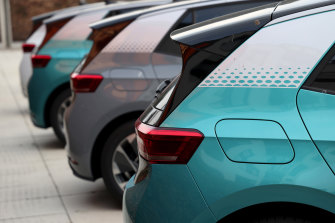 New Volkswagen ID.3 electric automobiles at the company’s headquarters in Wolfsburg. The company is challenging Tesla as the global leader in EVs.Credit:Bloomberg

The $3000 incentive will be available for vehicles purchased after Sunday May 2. There will be 4000 spots in the program released initially, with further rounds yet to be announced.

Adrian Dwyer, chief executive of Infrastructure Partnerships Australia which is a strong proponent of the EV tax, said the announcement would “put to bed the fringe fear campaign.”

“Victoria’s transport and climate package makes a mockery of the claim that a road user charge will slam the brakes on EV sales,” he said.

“Combining this comprehensive proposal with a modest road user charge strikes the right balance between encouraging EVs and making sure we can fund our roads.

“This is a well-designed and targeted package of incentives that not only reduces the upfront cost of EVs for everyday Victorians, but also sets a clear path to rapidly decarbonise the transport sector.”

As part of the new package, the government plans to more than triple the amount of charging stations for ZEVs across Victoria from 24 to 74 stations, with $19 million committed to increase stations on major highways and near tourist attractions.

Around $10 million will be spent to upgrade the government’s fleet, with 400 new ZEVs over the next two years.

Victorian minister for energy, environment and climate change Lily D’Ambrosio said in a press release that as the transport sector is a “significant contributor to our emissions”, the new measures would be a vehicle for change.

An expert advisory panel will soon be established to advise the government on emission policy and infrastructure.

The Victorian government has set a target to reach zero emissions in the state by 2050.