Disturbing video from Wednesday’s riot at the U.S. Capitol shows what appears to be a Capitol Police officer being crushed between a riot shield and a metal door as a mob of rioters force their way into the building.

The young officer, who is bloodied at the mouth, screams in pain and cries for help.

The unidentified officer's medical condition following the incident was not immediately known.

The rioters, armed with pipes and pepper spray, shoved and kicked officers – even using their own shields against the Capitol force — to push their way through the front entrance. 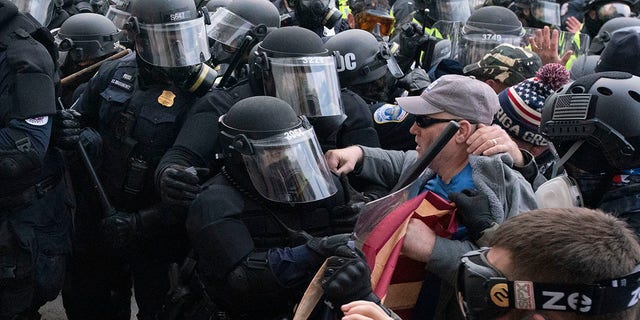 Capitol Police officers in riot gear push back as demonstrators try to break a door of the U.S. Capitol on Wednesday, Jan. 6, 2021, in Washington. (Associated Press)

In the chaotic video, rioters shout "Heave ho!" as they use a riot shield to break through the door. One of the protesters appears to spray a chemical irritant toward the officers and another person can be heard shouting "Grab their g—-mn shield!"

Another Capitol Police officer, Brian Sicknick, died in a hospital Thursday of injuries suffered during the riot and a female rioter from California was fatally shot. Three other people died of medical emergencies before or during the riot, police have said.

Only a few dozen officers were stationed at the building’s entrance when the group marched down the National Mall intent on storming the Capitol the same day lawmakers were certifying the Electoral College results.