A Virginia man is raising awareness of Alzheimer’s disease by rowing for 24 hours straight – possibly setting a world record in the process.

John Musser’s wife, Robin, was 45 when she first noticed problems with her memory. Five years later, doctors diagnosed her with early onset Alzheimer’s.

Previously, John Musser has walked into the Grand Canyon and back out while wearing dog tags for people who had loved ones suffering from Alzheimer’s – 120 tags in his first trek. This year, he will row on a machine for 24 hours starting June 20  – part of The Longest Day campaign  – to raise money for the Alzheimer’s Association by accomplishing an “impossible” task.

Musser, 58, previously participated in a 24-hour row with the Special Operations Warrior Foundation in Williamsburg, so he’s no stranger to rowing or the physical demands of his task. He started training in February for the row, but his history as an Army airman and a CrossFit athlete will make the task a little easier. 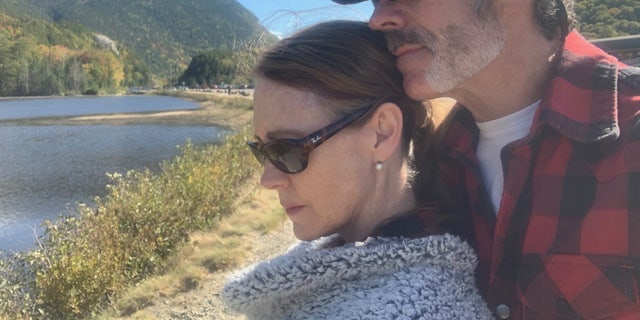 John Musser and his wife Robin Musser pose for a photo. Robin was diagnosed with early-onset Alzheimer’s December of 2018 and John has been caring for her ever since. (Courtesy Photo)

In fact, should he continue on his current trajectory, Musser will set a world record for most miles rowed in his age group. While he will weigh in as a lightweight, Musser aims to beat the heavyweight rmark of 295,800 meters in 24 hours.

“I want it to hurt,” Musser said. “I want to suffer. …  I want it to feel impossible to me because that is some kind of strike-back.”

Musser didn’t notice anything wrong with his wife at first, but around 2009 she started having difficulty remember the right words or why she called him. When they visited doctors and psychologists to figure out what the issue might be, everyone focused on potential head trauma, not a disease like Alzheimer’s.

“She was just too young and beautiful to be our typical image of a beehive-haired grandmother with Alzheimer’s,” Musser told Fox News. “But in my mind, I still kind of figured there was a chance of it because I had seen it in my family a lot.”

His father passed away in 2007 after suffering for years with Alzheimer’s.

“I kind of knew what it looked like and how it manifested, and I was frustrated that no one was going down that road,” John Musser said of the initial tests done on his wife in 2009.

A significant adjustment followed Robin’s diagnosis, even for someone who had seen Alzheimer’s first-hand with other family members.

“I saw my mother, and I never understood what she was going through,” he said. “She would lose her patience and get frustrated, lash out at my dad … and I just couldn’t understand it.”

But he understands it now, and he wishes more people did as well. To help bring awareness to the difficulty and pain of living with a loved one with Alzheimer’s, Musser has taken on physical challenges that seem “impossible.”

To accomplish the task, he will be joined by former Army buddies and volunteers who also have loved ones who suffer from Alzheimer’s, all of whom will take turns rowing on machines beside Musser and joining him for stretches along his journey across the day.

Perhaps most fitting, Musser will attempt his feat in his church, St. Joan of Arc Catholic Church in Yorktown, where he will also one day be buried with his wife.