Voting lawsuits pile up across US as election approaches

Washington: They've been fighting in Wisconsin and Pennsylvania over the cutoff date for counting mailed ballots, and in North Carolina over witness requirements. Ohio is grappling with drop boxes for ballots as Texas faces a court challenge over extra days of early voting.

Measuring the anxiety over the November election is as simple as tallying the hundreds of voting-related lawsuits filed across the country in recent months. The cases concern the fundamentals of the American voting process, including how ballots are cast and counted, during an election made unique by the coronavirus pandemic and by a president who refuses to commit to accepting the results. 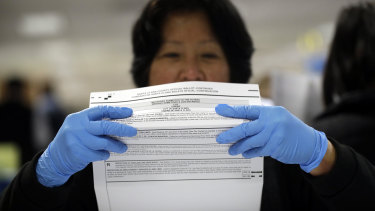 A mail-in ballot is examined at the Santa Clara County Registrar of Voters in San Jose, California.Credit:AP

The lawsuits are all the more important because President Donald Trump has raised the prospect that the election may wind up before a Supreme Court with a decidedly Republican tilt if his latest nominee is confirmed.

“This is a president who has expressed his opposition to access to mail ballots and has also seemed to almost foreshadow the inevitability that this election will be one decided by the courts,” said Kristen Clarke, executive director of the National Lawyers Committee for Civil Rights Under Law.

That opposition was on display on Tuesday, local time, during the first presidential debate when Trump launched into an extended argument against mail voting, claiming without evidence that it is ripe for fraud and suggesting mail ballots may be “manipulated.”

“This is going to be a fraud like you’ve never seen,” the president said of the massive shift to mail voting prompted by the pandemic.

The lawsuits are a likely precursor for what will come afterward. Republicans say they have retained outside law firms, along with thousands of volunteer lawyers at the ready. Democrats have announced a legal war room of heavyweights, including a pair of former solicitors general.

The race is already regarded as the most litigated in American history, due in large part to the massive expansion of mail and absentee voting. Loyola Law School professor Justin Levitt, a former Justice Department elections official, has tallied some 260 lawsuits arising from the coronavirus.

The Republication National Committee says it's involved in more than 40 lawsuits, and a website operated by a chief Democrat lawyer lists active cases worth watching in about 15 states.

Democrats are focusing their efforts on multiple core areas — securing free postage for mail ballots, reforming signature-match laws, allowing ballot collection by third-parties like community organisations and ensuring that ballots postmarked by Election Day can count. Republicans warn that those same requests open the door to voter fraud and confusion and are countering efforts to relax rules on how voters cast ballots this November.

“We're trying to prevent chaos in the process,” RNC chief counsel Justin Riemer said in an interview. “Nothing creates more chaos than rewriting a bunch of rules at the last minute.”

But there have been no broad-based, sweeping examples of voter fraud during past presidential elections, including in 2016, when Trump claimed the contest would be rigged and Russians sought to meddle in the outcome.

Some of the disputes are unfolding in states not traditionally thought of as election battlegrounds, such as Montana, where there is a highly competitive US Senate race on the ballot. A judge on Wednesday rejected an effort by Trump’s reelection campaign and Republican groups to block counties from holding the general election mostly by mail.

But most of the closely watched cases are in states perceived as up-for-grabs in 2020 and probably crucial to the race.

That includes Ohio, where a coalition of voting groups and Democrats have sued to force an expansion of ballot drop boxes from more than just one per county. Separately on Monday, a federal judge rejected changes to the state's signature-matching requirement for ballots and ballot applications, handing a win to the state’s Republican election chief who has been engulfed with litigation this election season.

In Arizona, a judge's ruling that voters who forget to sign their early ballots have up to five days after the election to fix the problem is now on appeal before the 9th US Circuit Court of Appeals.

A federal appeals court on Tuesday upheld a six-day extension for counting absentee ballots in Wisconsin as long as they are postmarked by Election Day. The ruling gave Democrats in the state at least a temporary victory in a case that could nonetheless by appealed to the US Supreme Court.

In neighbouring Michigan, the GOP is suing to try to overturn a decision that lets the state count absentee ballots up to 14 days after the election.

In battleground North Carolina, where voters are already struggling with rules requiring witness signatures on absentee ballots, the RNC and Trump’s campaign committee have sued over new election guidance that will permit ballots with incomplete witness information to be fixed without the voter having to fill out a new blank ballot.

Pennsylvania has been a particular hive of activity.

Republican lawmakers asked the US Supreme Court on Monday, local time, to put a hold on a ruling by the state's highest court that extends the deadline for receiving and counting mailed-in ballots. Republicans also object to a portion of the state court’s ruling that orders counties to count ballots that arrive during the three-day extension period even if they lack a postmark or legible postmark.

Meanwhile in federal court, Republicans are suing to, among other things, outlaw drop boxes or other sites used to collect mail-in ballots.

The Supreme Court itself has already been asked to get involved in several cases, as it did in April, when conservative justices blocked Democratic efforts to extend absentee voting in Wisconsin during the primary.

There is, of course, precedent for an election that ends in the courts. In 2000, the Supreme Court settled a recount dispute in Florida, effectively handing the election to Republican George W. Bush.

Barry Richard, a Florida lawyer who represented Bush during that litigation, said there's no guarantee the Supreme Court will want to get involved again, or that any lawsuit over the election will present a compelling issue for the bench to address.

One significant difference between then and now, he said, is that neither candidate raised the prospect of not accepting the results.

“There was never any question, in 2000, about the essential integrity of the system. Neither candidate challenged it," Richard said. "Nobody even talked about whether or not the losing candidate would accept the results of the election. That was just assumed."