Two ‘furious’ waste removal men filmed themselves dumping a truckload of a customer’s rubbish over her driveway – as revenge when she reportedly refused to pay up.

Jonathan Morgan, 31, and his brother Calum, 27, spent two hours clearing the mess, which consisted of bed frames, mattresses, and doors, outside the resident’s house in Cardiff, Wales, before loading it up on their lorry.

However when the customer ‘failed to pay up’, the brothers, who run Cardiff Waste Removal & House Clearance, decided to take matters into their own hands.

In footage shared on social media, Calum films his brother Jonathan as he reverses the truck up to the customer’s front door and lifts its fully-loaded rear. 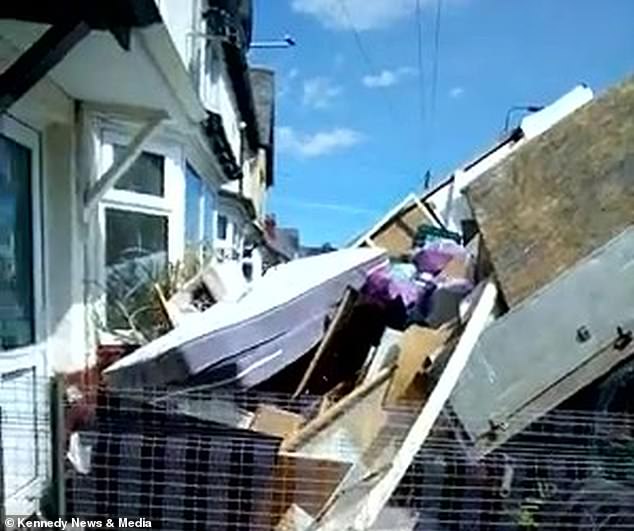 Callum Morgan films his brother Jonathan as he lifts the lorry’s fully-loaded rear and dumps the rubbish onto the resident’s driveway in Cardiff, Wales, on July 20 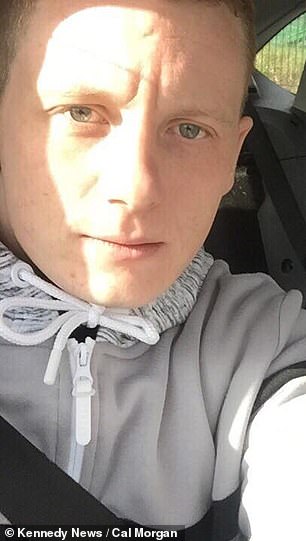 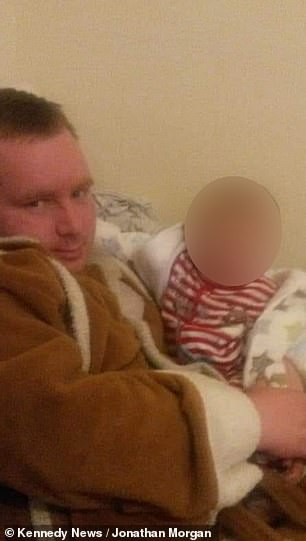 With the rear of the truck beginning to tilt back, Calum says: ‘This is what happens to customers who don’t pay. They get a refund, free of charge hey Jon?’

Within seconds, the pile of rubbish falls to the ground and forms a mountain at the front of the property as Calum exclaims: ‘Excellent!’

The brothers, who turned up to the house on July 20, said they were told by the customer she would return with their money before they left but when she did not come back the brothers were forced to phone her.

After they were allegedly blocked on four separate phone numbers, Jonathan said he gave the woman an ultimatum of paying within an hour or they would give her rubbish back.

However the pair claim the woman dared them to do so – despite the men already offering a discount when the woman claimed she was struggling for money.

Jonathan said: ‘That’s why we were even more angry when it became clear she was trying to rip us off anyway. We quoted her £120, normally it would have been a £200 job.

‘She seemed like a really nice lady and explained she didn’t have too much money so we said we’d do it for just above cost price. We weren’t making a huge amount on the job, just wanted to help her out.

‘I don’t know why she was trying to negotiate if she was going to rip us off anyway. Maybe it was to keep up a facade.

‘We were obviously angry but it also made us a little bit upset. We were getting on really well with her so when it turned out to be a bare faced lie, we were a little down.

‘She told us she was going across the city to her mum’s and pick up the cash and that she’d be back before we finished the job. 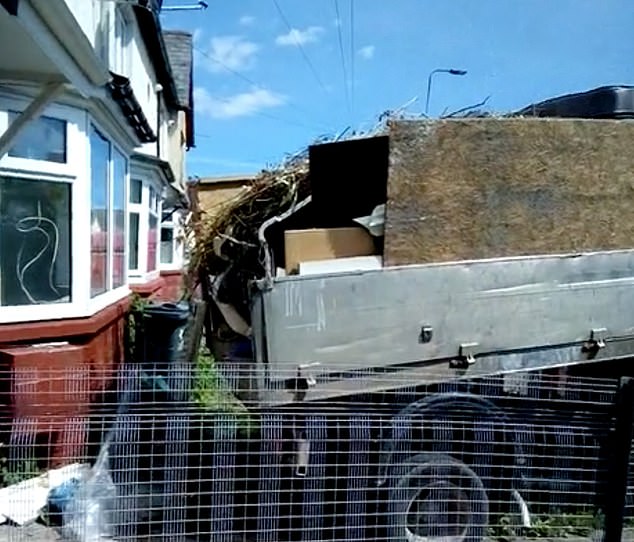 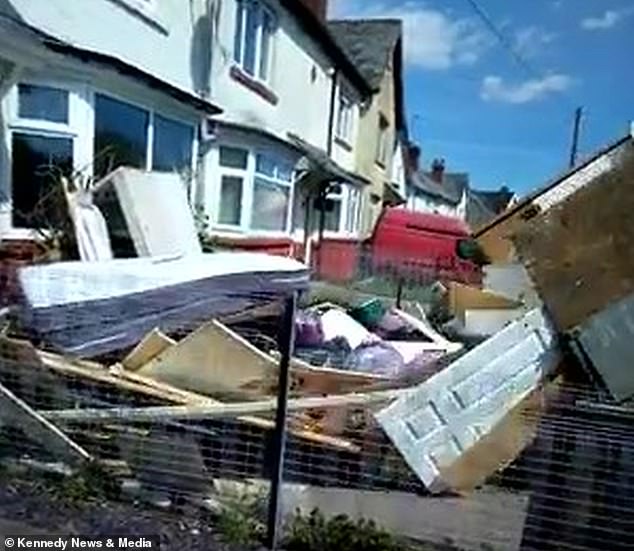 ‘We loaded the lorry and she still wasn’t back. We called her a couple of times and gave us various excuses about why she hadn’t returned.

‘She then started ignoring our calls before blocking our number. We tried on a second phone and she did the same thing. We tried with three or four different numbers but she kept blocking them.

‘It became apparent that she was ignoring us so we finally got through to her on a landline and told her the service needed to be paid for.

‘We said if she didn’t pay us within the hour, we’d return the property to her. She sort of dared us to and said she didn’t think we’d do it.

‘But we did. All we did was give her back her property. I wouldn’t want to be accused of stealing.’

Following the incident, the pair described their frustration at being made to miss other jobs while waiting for the woman to return.

Calum said: ‘We weren’t really making any money on the job. Because we’d given her such a cheap price, we didn’t expect her to do that.’

Jonathan added: ‘We were really busy with other work but squeezed her in as she made out she was desperate to get the stuff shifted.

‘She was delaying us from going to other jobs which was costing us money.

‘One of her relatives has phoned us and said we’ve got the money now, can you take waste away if we pay up front?

‘We’ve said we’re not interested in the job anymore. We don’t want to go back to the property. 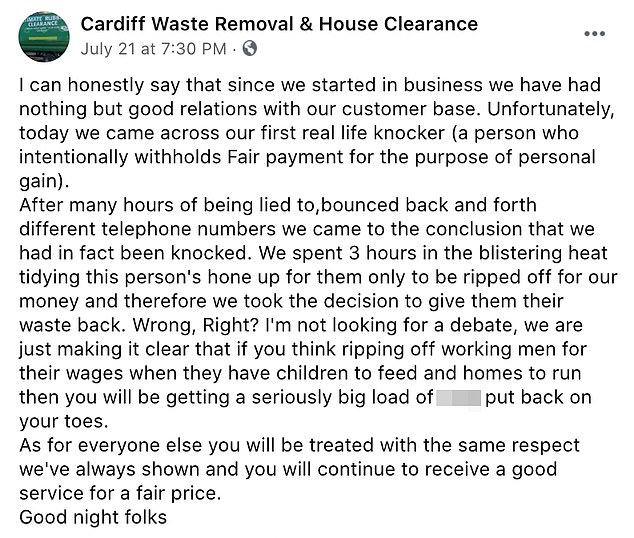 Following the incident, the brothers took to their company Facebook page to share the footage and a message

‘We’ve had a couple of threats as they said they’d dump stuff on our mum’s property.’

The brothers later shared their footage on their Facebook page Cardiff Waste Removal and Clearance next to a post which read: ‘I can honestly say that since we started in business we have had nothing but good relations with our customer base.

‘Unfortunately, today we came across our first real life knocker (a person who intentionally withholds Fair payment for the purpose of personal gain).

‘After many hours of being lied to, bounced back and forth different telephone numbers we came to the conclusion that we had in fact been knocked.

‘We spent 3 hours in the blistering heat tidying this person’s hone up for them only to be ripped off for our money and therefore we took the decision to give them their waste back. Wrong, Right?

‘I’m not looking for a debate, we are just making it clear that if you think ripping off working men for their wages when they have children to feed and homes to run then you will be getting a seriously big load of cr*p put back on your toes.

‘As for everyone else you will be treated with the same respect we’ve always shown and you will continue to receive a good service for a fair price.’