Beer we go! Wetherspoons unveils sneeze screens and social-distanced seating as staff do a deep-clean before chain reopens 750 pubs on July 4

If there is one thing which many thousands of Britons have missed during lockdown, it is the joy of a pint at our local pub.

But Wetherspoons fans will soon be able to enjoy the delights of a cheap tipple once again when 750 of the pub chain’s outlets re-open on July 4.

However, to prevent the spread of coronavirus the chain has installed sneeze screens and socially-distanced seating and deployed staff to rigorously clean tables.

Staff were pictured at the Mossy Well pub in Muswell Hill, North London, on Wednesday as they prepared the venue for its first customers in more than three months.

The till area has been encased with perspex screens, hand sanitising stations have been installed and partitions have been put up between seating areas.

One female staff member was seen wiping down tables as well as the bar area. 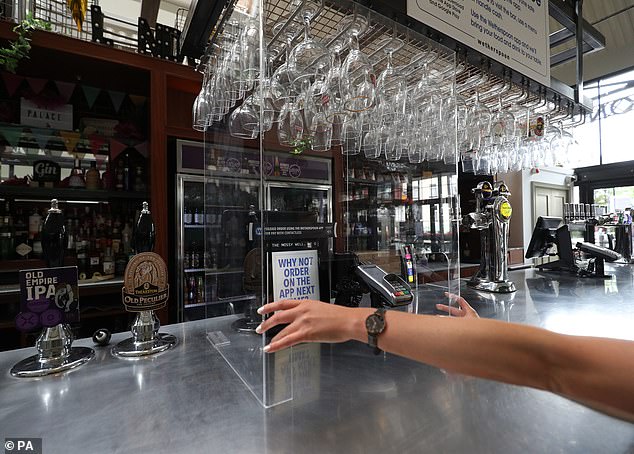 Wetherspoons fans will soon be able to enjoy the delights of a cheap tipple once again when 750 of the pub chain’s outlets re-open on July 4. Staff were pictured at the Mossy Well pub in Muswell Hill, North London, on Wednesday as they prepared the venue for its first customers in more than three months 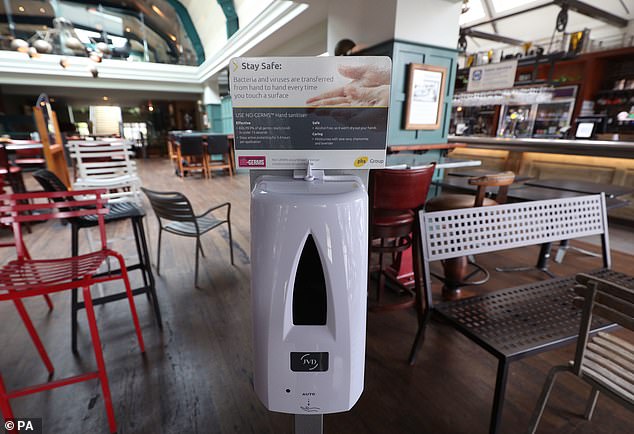 The till area has been encased with perspex screens, hand sanitising stations have been installed and partitions have been put up between seating areas

The preparations come after the Prime Minister gave the go-ahead last week for pubs and bars to re-open on ‘Super Saturday’ as long as they take steps to protect staff and customers from the bug.

Boris Johnson said establishments will also have to keep a record of drinkers so they can be contacted if someone with the virus was in the venue.

Wetherspoons’ chairman Tim Martin welcomed the move and said 750 would open across England, while ones in the rest of the UK remain closed.

Mr Martin said: ‘We are extremely pleased that pubs are reopening on July 4 after a long hiatus.

‘We are going to discuss the precise Government proposals with our pub managers and staff before we comment further on the details.’

Wetherspoons customers will use one entrance with a separate exit door where possible when they reopen.

Entry and exit will be marked out by floor stickers and/or barriers and door security will monitor the numbers entering and leaving to prevent overcrowding. 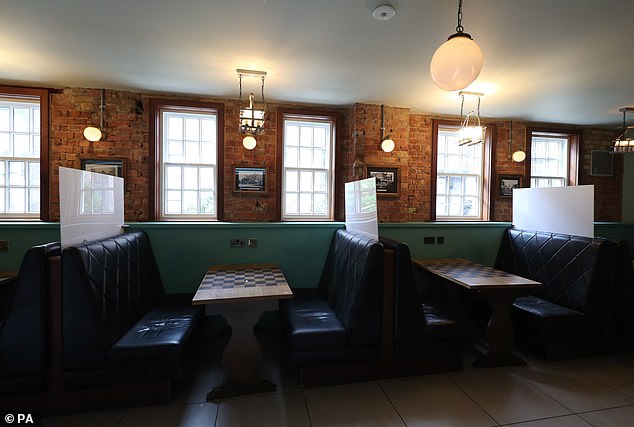 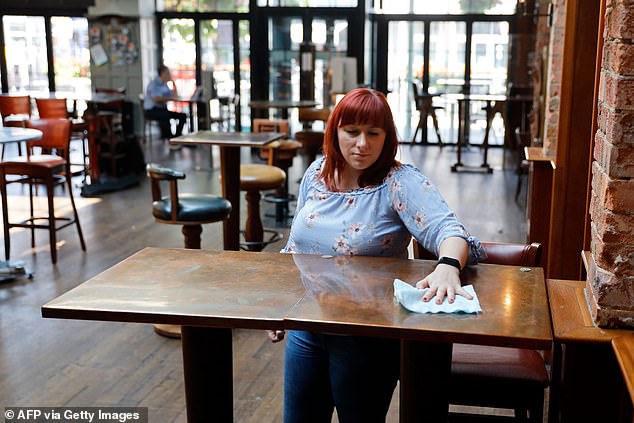 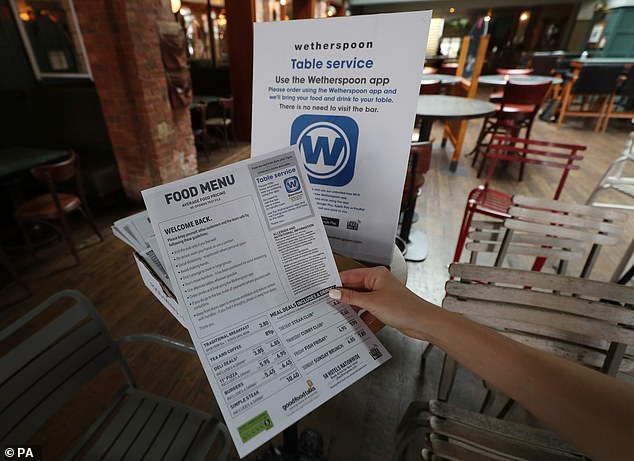 All of its pubs will have screens at the tills and there will also be screens to create seating areas where it is not possible to separate the tables by two metres.

Wetherspoon staff will get gloves, masks and protective eyewear, but it is not mandatory for them to wear them unless the Government says so.

Employees will also have their temperatures taken on arrival for their shifts.

Workers will hand over all drinks holding the base of the glass and when ordered by the app they will be delivered to the table on a tray.

Each pub will have at least ten or more hand sanitiser stations and customers should use them on arrival and multiple times during their visit.

One member of staff will be dedicated to sanitising surfaces. 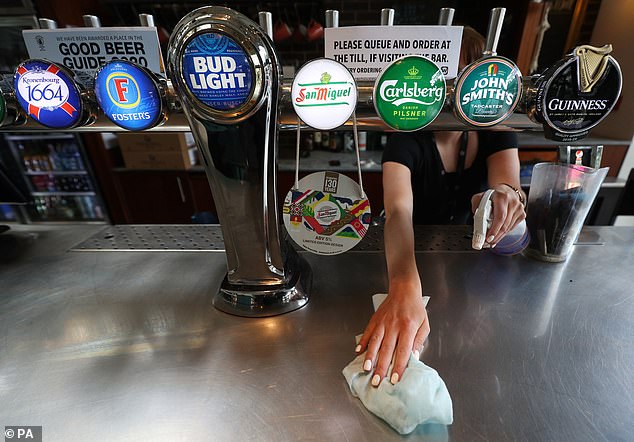 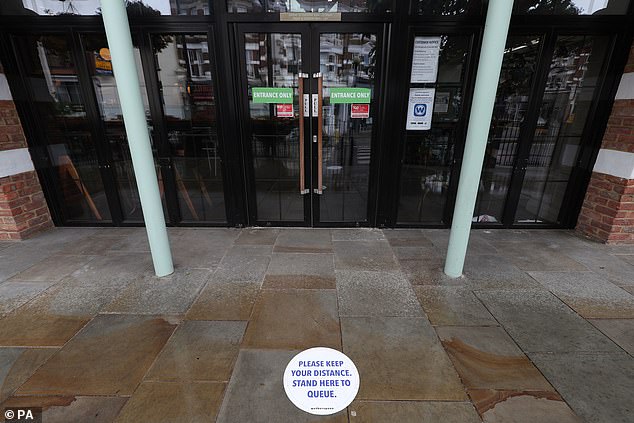 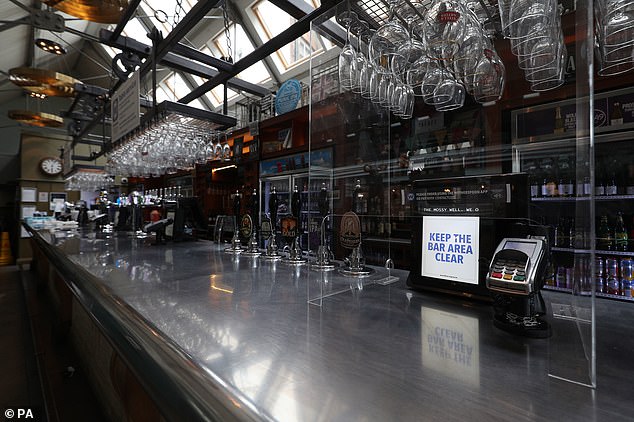 The drinks menu will remain the same but food will be pared back and items should be ordered via the official JD Wetherspoon app if possible.

Tills will be open and can take cash. The pubs will provide sachets – ketchup, mayonnaise, salt pepper etc – rather than in their usual condiment bottles.

But some customers have said they will boycott the company due to the way Mr Martin treated his staff during the lockdown.

The businessman had told his 43,000 workers they could get a job at a supermarket and they would not be paid until the Government’s furlough scheme kicked in.

But the outspoken Brexiteer, 65, U-turned after pressure from a huge public backlash. 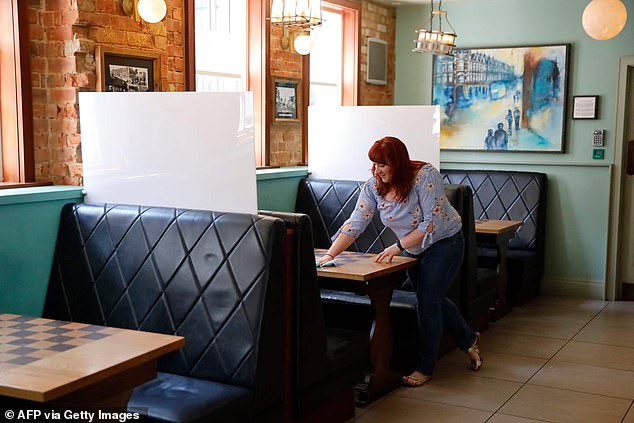 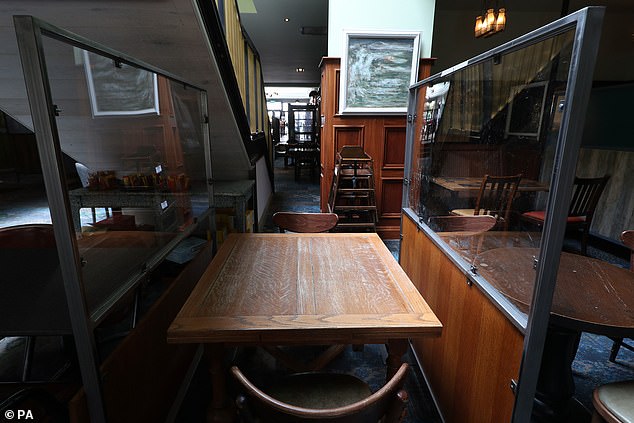 Seating areas are also being separated by protective screens

A number of social media users – who tweeted #NeverSpoons – planned to avoid the cheap watering hole.

One man wrote on Twitter: ‘Boycotting Weatherspoons isn’t about Brexit/Remain its about having respect for your fellow person.

‘Tim Martin wanted to bin off his workforce, suggesting they should get jobs at Tesco.

‘Public pressure force him to furlough them. #NeverSpoons support a locally owned bar instead.’

A woman posted: ‘It can open up whenever it likes, I’m never going to a Wetherspoons again. #NeverSpoons.’

Another wrote: ‘With some pubs opening soon I would implore everyone to be very safe & BOYCOTT WETHERSPOONS!

‘No one needs to go to a pub badly enough to spend there money in Tipsy Tim’s nasty establishments!’

One put: ‘Wouldn’t it be hilarious if, on 4th July all the (former) staff say: ”F*ck off, Tim Martin, we’re all at Tesco now and we prefer it”.’

And another added: ‘Support local bars and pubs when they eventually open. Support living wage employers. 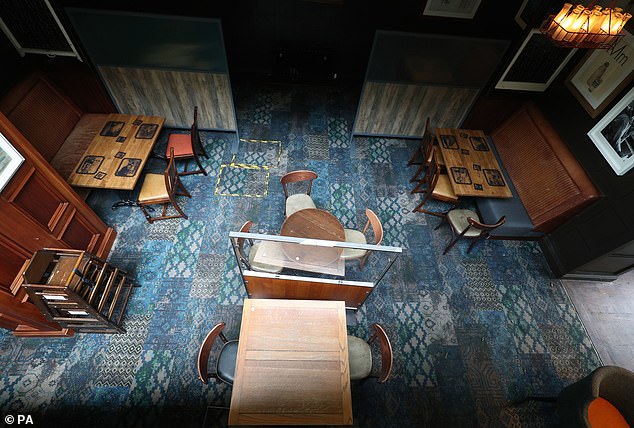 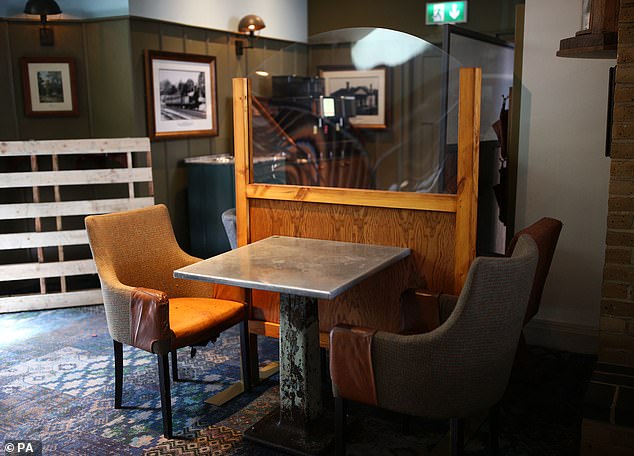 ‘I know the cheap booze is tempting, but have a hard think about where your money is going. #wetherspoons #neverspoons.’

But some social media users pointed out it would be the workforce that would be hardest hit by any boycott.

One woman wrote: ‘You realise by boycotting spoons you’re putting those same people out of work.

‘What Tim did was not on, however he did not sack us. After the backlash we have all been paid our wages. If you want to boycott that’s fine but you’re not doing anyone any favours.’

Another added: ‘Boycotting Wetherspoons will do nowhere near as much good as going into your local and (safely) passing the staff union leaflets.

‘If you want to improve Spoons, help empower the workers. Martin can withstand a boycott, he can’t withstand the only boycotts that work: strikes.’

Pub owners have warned customers to only turn up if they have pre-booked a table as bosses prepare to reopen after being shut for more than three months.

Revellers will be asked to register before having a drink at their local under plans to limit the spread of Covid-19 as England’s hospitality industry reopens. 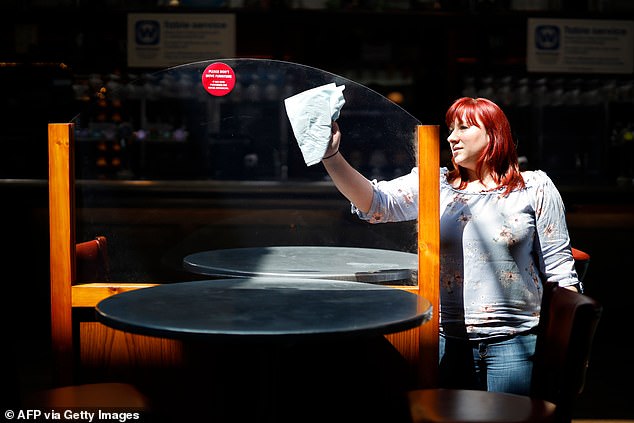 They were closed as part of efforts to control the spread of coronavirus. Pictured: A staff member at the Mossy Well cleans the screens between tables 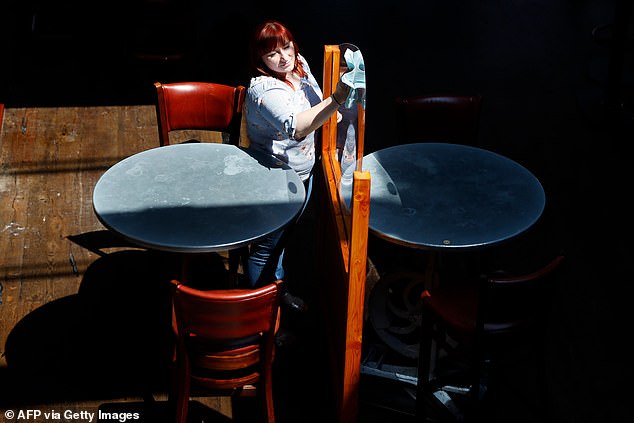 The Prime Minister told the Commons that customers will be allowed back into pubs as they reopen for the first time since closing on March 20 just before lockdown.

Some pubs already have all their tables reserved on the opening day – dubbed ‘Super Saturday’ – with staff taken off furlough to help cope with bookings.

And politicians are expected to go on a PR blitz around the country to encourage people to return to pubs which will reopen with social distancing measures in place.

It has been suggested some Ministers might go to the pub for a PR stunt, with a Government official saying: ‘There’s a job to be done to encourage people to go out.’

Meanwhile car parks and hotel grounds could be converted into temporary beer gardens to help with social distancing by encouraging drinkers outside.

New laws due to be introduced to Parliament this Thursday will allow pubs to turn their ‘spaces inside out’ this summer, the Daily Telegraph reported. 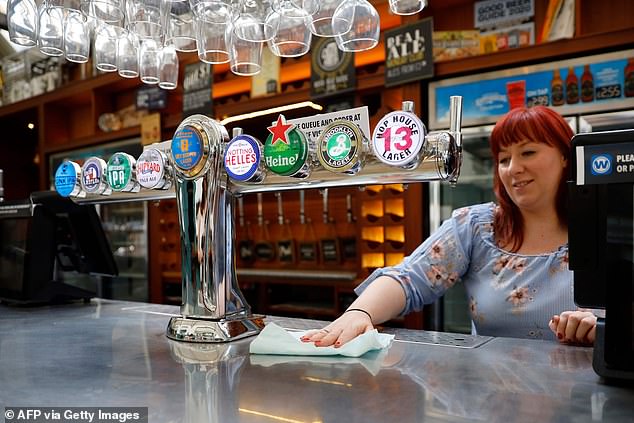 One source said: ‘At the moment, you (pubs) have to specify in the plan for your licence where you are selling and serving alcohol. Beer gardens tend to be licensed already but car parks aren’t.

‘You could have little courtyards that would be normally used for storage, car parks or land that you don’t normally license. A lot of hotels will have huge gardens but won’t have an outdoor licence.’

Mr Johnson told the Commons yesterday restaurants and pubs will be allowed to reopen from July 4.

He said: ‘I can tell the House that we will also reopen restaurants and pubs. All hospitality indoors will be limited to table service and our guidance will encourage minimal staff and customer contact.

‘We will ask businesses to help NHS Test and Trace respond to any local outbreaks by collecting contact details from customers as happens in other countries and we will work with the sector to make this manageable.’

The Prime Minister also said the two-metre rule will be reduced to ‘one metre-plus’ from July 4.

He told the Commons: ‘Given the significant fall in the prevalence of the virus we can change the two-metre social distancing rule from July 4.’

He continued: ‘Where it is possible to keep two metres apart, people should. But where it is not, we will advise people to keep a social distance of one metre-plus, meaning they should remain one metre apart while taking mitigations to reduce the risk of transmission.’

Mr Johnson added: ‘I know this rule effectively makes life impossible for large parts of our economy even without other restrictions, for example it prevents all but a fraction of our hospitality industry from operating.’

Pub and hospitality bosses cheered the Government’s proposals to allow customers through their doors again on July 4 as ‘a welcome relief’.

But on Sunday, it emerged that thousands of pubs may never reopen despite the lifting of restrictions.

One in ten landlords said that social distancing measures – even reduced to a metre – would mean a cut in capacity and profits.

This could lead to permanent closures, with small pubs set to be hardest hit.

According to the British Institute of Innkeeping, affected pubs do not have enough room to keep their customers apart.

Any pub that does reopen will also face the extra cost of ensuring social distancing is followed, which could mean hiring more staff.

They would also they have to make sure adequate PPE is available for all workers.

To try and stop some pubs from having to close their doors forever, the boss of the British Institute of Innkeeping has called on the government to give them extra furlough money, cash grants and VAT tax breaks.

He told The Sun on Sunday: ‘For the majority, opening with a limited capacity means they will be trading at a loss.’

Some have warned that developers may now swoop in, converting pubs into other businesses or flats.

Greg Mulholland, chairman of the British Pub Confederation, said: ‘The usual vultures are circling, seeking to profit from turning them into other things, against the wishes of local communities.’ 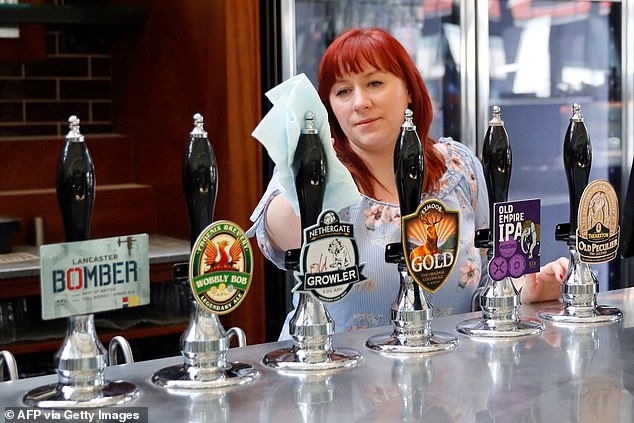 On Sunday, it emerged that thousands of pubs may never reopen despite the lifting of restrictions