The unlikeliest royal friendship of them all: One was poised to become Prince of Wales, the other was a nationalist firebrand. But when Dr Tedi Millward, who has died aged 89, taught Prince Charles Welsh, it formed a lifelong bond, writes RICHARD KAY

Fifty-one years ago this month, a shy young man in a collar and tie climbed the 87 steps of a spiral staircase to his new tutor’s study.

The Prince of Wales faced eight weeks of intensive instruction in Welsh: the language, Wales’s history and, crucially, its nationalism.

But if the Prince of Wales was daunted by the prospect, having been prised out of his beloved Cambridge for the draughty environs of the University College of Wales at Aberystwyth, then the man waiting across the desk was just as gloomy.

Edward ‘Tedi’ Millward had no wish to educate Prince Charles in the finer points of Welsh, and no time at all for the Establishment that he perceived the Prince represented.

He was, after all, a committed nationalist, resented the monarchy and believed that if there were to be a Prince of Wales he should be Welsh, not English.

It was not a promising start. Yet in the weeks that followed, an extraordinary friendship unfolded between teacher and student that endured over the decades that followed.

The story of the prince and the professor was told with several outlandish embellishments in the most recent season of The Crown. Some of it was true but a lot wasn’t. And with the death of Dr Millward at the age of 89, the real story of their relationship makes more interesting reading than the Netflix fiction.

In The Crown, we are introduced to the Prince arriving for high tea at Millward’s modest home. Charles is apparently struck by how tenderly Millward and his wife Silvia treat their three-year-old son Andras, and we are clearly meant to draw a contrast between that family warmth and the distant relationship the Prince had with the Queen and Duke of Edinburgh — or so the show imagines.

But such blurring of fact and fiction has long been The Crown’s stock-in-trade, for the real Dr Millward never did invite his royal charge to supper. In fact, said Millward, all the scenes set at his home were made up. ‘Silvia [his wife] was not in favour of him,’ he recalled last year. ‘I would talk to her about him but we didn’t ask him for tea.’

That was an unnecessary exaggeration of the poignant relationship between the studious heir to the throne and the Welsh nationalist entrusted with instructing Charles ahead of his investiture as Prince of Wales in July 1969. 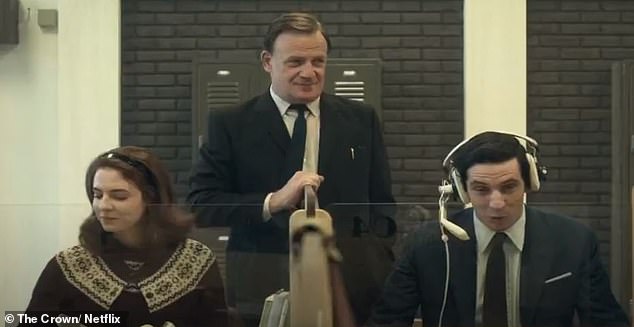 Tutor and Prince: Mark Lewis Jones and Josh O’Connor in The Crown

Millward was astonished to have been selected for this most delicate of tasks. An expert on the Welsh language, he was also vice president of Plaid Cymru — standing as the party’s candidate in Montgomeryshire — and a leading light in the nationalist movement.

He was also rather proud to be in Special Branch’s ‘black book’ of political agitators.

According to the storyline in The Crown, Millward is a deeply reluctant tutor who regards the position of Prince of Wales as ‘a princehood illegitimately imposed on us by an oppressive imperial conquest’.

He tries to resist his appointment, telling academic bosses at the university where the Prince spent just one term: ‘You can’t make me do this. It would violate every belief in my body.’

He gives in but refuses to bow or call the Prince ‘Your Royal Highness’. There is also a row when Millward tears into Charles for not taking his studies, which include long sessions in a language laboratory listening to Welsh tapes, seriously enough.

The reality was rather different. Recalling their encounters years later, Millward said: ‘He started from nothing, so learning Welsh was difficult. He had one-on-one tutorials with me once a week.

‘He was eager and did a lot of talking. By the end his accent was quite good. Towards the end of his term, he said good morning — ‘Bore da’ — to a woman at college. She turned to him and said “I don’t speak Welsh!”’

Nor did the pair ever argue — and the Prince was truly hard-working.

His presence did cause a stir, however, among fellow undergraduates in his halls of residence.

‘He wasn’t popular with some students,’ said Millward. ‘They couldn’t get to sleep at night with him practising. I was told they were annoyed because his voice echoed so much. He really worked quite hard.’

As for how he would address him, the tutor was quite clear in an interview he gave the Daily Mail before the Prince’s arrival at Aberystwyth in March 1969.

‘At my lectures, he is just plain mister,’ he said. 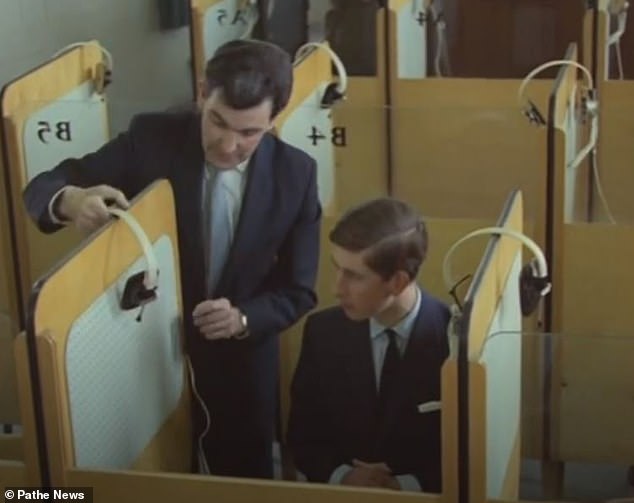 He also revealed that the Prince would not just receive a crash course in the Welsh language but would also need tuition on the history of Welsh nationalism.

For his part, Charles was bleak about his immediate future, writing gloomily to friends about his loneliness in Wales.

It may not have been a promising opening. But, incredibly, teacher and student hit it off. ‘In the end I got on quite well with him,’ Millward said. ‘I found him intelligent and charming. We became quite close.’

Close enough for the teacher to be invited to the Prince’s wedding to Lady Diana Spencer in July 1981 — though he politely declined.

In fact, the friendship between the nationalist and his royal former student endured and they continued to exchange Christmas cards.

‘We stayed in touch,’ Millward recalled. ‘He would ask me for advice if he had to make a speech in Welsh. And I met Diana a few times when she came to Wales.’ He added: ‘They didn’t seem to get on at all.’

Charles never forgot his tutor. ‘I was quite touched when he sent a handwritten letter a few years ago because he’d heard Dad was in hospital with a life-threatening illness,’ Dr Millward’s daughter Llio, a singer-songwriter, disclosed.

Last year, memories of those eight weeks at the end of the 1960s came flooding back for the academic, when he and his daughter were invited onto the set of The Crown, where he met Mark Lewis Jones, the actor who plays him in the series. Jones wore some of Dr Millward’s ties on screen for added authenticity. 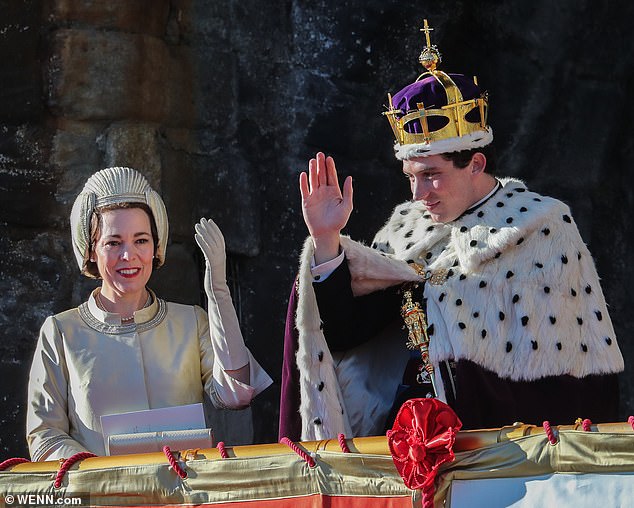 Olivia Colman (L) as The Queen and Josh O’Connor as Prince Charles (R) film a scene for the Netflix drama at Caernarfon Castle, depicted when Charles was invested as Prince of Wales in July, 1969

Despite the friendship Millward and Charles subsequently forged, the former did not always look back on his role fondly.

‘I’m not particularly proud of being his Welsh teacher,’ he declared a few months ago. ‘It was forced upon me.

‘I wasn’t in favour of him becoming Prince of Wales — and he knew it.’

The decision to interrupt Charles’s education at Cambridge for a term at a Welsh university was a political, not a cultural one.

In The Crown, the move is initiated by then Prime Minister Harold Wilson.

In reality, it had been the idea of Welsh Secretary George Thomas — later the Commons Speaker — who feared the growth of nationalism in the Principality, where holiday homes were being torched and bombs detonated. It was felt that Charles’s presence would strengthen the bonds between the people of Wales and the Royal Family — though the omens were not great: on the day of his arrival at Aberystwyth, a stick of gelignite encased in a metal tube exploded in the street outside police headquarters in Cardiff.

At the university, though, the welcome was effusive, with a crowd of 500 including some excitable teenage girls. The only sour note was struck by a fellow student who predicted (correctly) that the Prince would be lonely.

Millward, the maverick choice as princely tutor, used to describe himself as ‘a renegade Englishman — my family came from Worcestershire’.

He admitted: ‘The police had me in their black book, so I was a bit surprised. Special Branch interviewed me very sternly before we started.’ He must have been on their radar for some time. In 1962 he had been involved in the very first Welsh language protest.

‘We didn’t want violence but we did want to get arrested,’ he later explained. ‘The idea was, we would insist on a trial in Welsh and make our case giving speeches in court.’

Advised that plastering public buildings with posters was a criminal offence, the newly appointed Aberystwyth University lecturer met up with fellow nationalists and they quickly got to work.

The only trouble was, the local constabulary decided to take no action, even when the nationalists stuck a poster to the door of the police station.

In the end, the protesters went for the classic Sixties demo — a sit-down, blocking the main road. 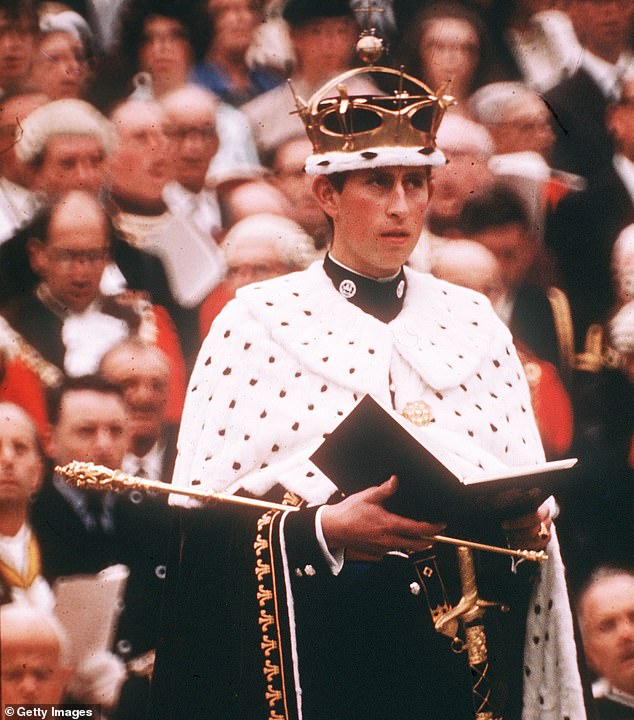 Solemn: Charles is invested as Prince of Wales in July, 1969, at Caernarvon Castle

They still weren’t arrested but it triggered an upsurge in Welsh nationalism, and when Charles was presented to him, Millward saw it as an opportunity to focus royal attention on Wales.

‘Both my parents described the Prince as sensitive and emotional, deeply thoughtful,’ said Llio, whose brother Andras died four years ago. ‘The Prince responded with a lot of sensitivity and concern regarding the plight of the Welsh language and the Welsh culture.

‘Neither Dad nor Mum, nor most Welsh people, had anything against the man, Charles. They had resistance to what he stood for, the Establishment he came from.

‘My mum had always been a Welsh nationalist. I remember her telling me she didn’t feel the need to curtsy when she met the Prince. She just shook his hand. But she actually thought he was “a lovely young man”.’

Llio’s parents, it was suggested in The Crown, met in the village of Capel Celyn, Gwynedd, which had been deliberately flooded to make a reservoir supplying England with water.

But it wasn’t true. ‘I don’t know where they got that from,’ Millward said last year.

Even so, it’s true that extreme nationalism surfaced in the run-up to the Prince’s Investiture, when two would-be terrorists — dubbed the Abergele Martyrs — blew themselves up in a failed attempt to dynamite the railway line on which Charles was due to travel.

In The Crown, Charles turns part of his investiture address into a sort of therapy session by comparing being ignored by his family to the plight of the Welsh.

In fact, the speech’s theme was approved by the Welsh Office and drafted by Buckingham Palace.

For his part, Millward always believed Charles did have mixed feelings about his role. ‘I don’t think he liked the thought of being Prince of Wales at that time,’ he recalled.

The collaboration between Prince and tutor was an education for them both.

And for Charles, there has been a welcome in the hillside ever since.