Will Britain see a weekend lockdown rebellion? Fears that scorching weather will tempt public into partying before new rules allowing six-strong groups come in on MONDAY

Boris Johnson has given the green light for outdoor gatherings of up to six people in England from Monday.

But Downing Street urged the public not to jump the gun today and tomorrow as temperatures soar above those in the Mediterranean.

Some clearly already had yesterday. A stretch of riverside in Ilkley, West Yorkshire, was packed with young revellers, who shunned social distancing rules to top up their tans.

And in Christchurch, Dorset, one family took folding chairs along as they gathered in a park.

Police chiefs and MPs have complained that the Government has created an impossible situation by announcing the changes too far in advance. There is also the possibility for confusion as while Wales also does not relax its lockdown rules until Monday, Scotland did so from yesterday.

From Monday, the number of people able to meet at once in England will be increased from two to six and they may use private gardens. But members of different households must still stay two metres apart. Tory former minister Tobias Ellwood said last night: ‘The nation has been incredibly disciplined to date.

‘Is it wise to tell the public that they can have barbecues with friends from Monday before a sunny weekend?’

Northumbria’s Labour Police and Crime Commissioner Kim McGuinness said: ‘The PM must have known he was going to create a situation that is difficult to police. The messaging looks like it was rushed forward to help ministers in a difficult position.’ 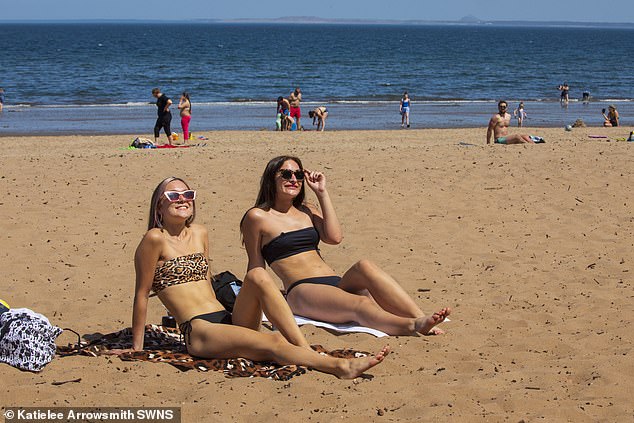 Anthony Stansfeld, the Conservative Police and Crime Commissioner for Thames Valley, said: ‘People should obey the rules – things are only just beginning to open up, so please don’t pre-empt them. All the relaxation of lockdown is being carefully timed by the Government’s chief scientists for good reason. It’s far better if people wait and do things at the proper time, so please don’t jump the gun. A bit more freedom is coming on Monday, so I urge everyone to be patient.’

Merseyside police warned that people would be fined if they turned up to parks and beaches in large groups this weekend.

Superintendent Jonathan Davies said: ‘I know people will be tempted to get outside. This is a reminder that the rules on spending time with only one other person from another household remains in place this weekend.’

The Prime Minister’s official spokesman defended the decision to announce the change on Thursday, saying: ‘We’ve said that wherever possible we would give a period of notice in advance of changes being made, ideally 48 hours or more. We’re enormously grateful for the efforts of the British public in sticking by the rules and getting the infection rate down and that does mean that from June 1 we will be able to allow people to have some more social contact in a safe and socially-distanced way. I’m sure that members of the public will show common sense.’

Police will not be carrying out spot checks on private gardens, the spokesman said. 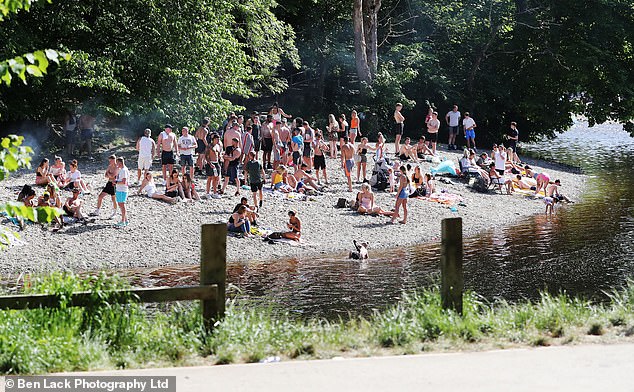 Pictured: Hordes of young people have fun by the riverside in Ilkley, West Yorkshire

Supermarkets reported the biggest sales of barbecue food on record. Charcoal sales are more than double those of a year ago and retailers such as John Lewis and B&Q have seen a surge in sales of barbecues at the end of the sunniest May since 1929.

The Co-op expects sales of its barbecue products to be up 80 per cent on last week and 320 per cent on a year ago. Marks & Spencer has seen sales of its own brand Prosecco double and its largest ever sales of rosé wine.

Britain is set to be warmer than much of southern Europe and even Bermuda as the heatwave continues through the weekend into next week.

Temperatures could reach 27C or even 28C (80 to 82F) in southern England today and tomorrow.

It could be even warmer by midweek, forecasters say.

The Met Office revealed yesterday that the UK has experienced its sunniest spring since records began in 1929.

An average of 573 hours of sunshine across the country were recorded up to Wednesday, with warm sunshine in most places since then and more forecast for the last two days of the month, today and tomorrow, as a record-breaking spring comes to an end.