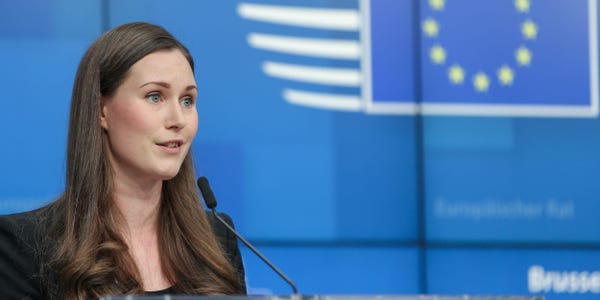 Scores of women expressed support for Finland's Prime Minister Sanna Marin, who was photographed on a magazine cover wearing a blazer without a top underneath.

Marin received backlash after posing for the magazine cover, CNN reported. In response, social media users rallied with supportive posts under the hashtag #ImWithSanna, sharing photos of themselves also wearing a blazer with nothing underneath.

"If you had to generalize it, it will be men saying it was wrong, and women saying it was fabulous," said Mari Paalosalo-Jussinmäki, director of women's media at A-lehdet magazine group. A-lehdet publishes Trendi, the magazine in which Marin appeared earlier this month.

"It was a little bit surprising," Paalosalo-Jussinmäki told CNN.

"We've had that sort of photo before, obviously, in a woman's glossy fashion magazine," she told the outlet. "We have portrayed women in blazers with nothing underneath for years and years, with famous people, and they had never created any response like this."

The article accompanying the cover story featured Marin addressing work-life balance and how the lawmaker copes with exhaustion.

Social media users called the backlash sexist and pointed to examples of other world leaders who have posed topless without repercussions. Russian President Vladimir Putin, for example, often poses for photographs topless, as did former Australian Prime Minister Tony Abbott. Neither received similar backlash, as some social media users pointed out.

"I think it speaks of women being tired and fed up with being restricted and told how to act and look and behave, and being judged by their looks — if you're young and beautiful, then you can't be taken seriously," Paalosalo-Jussinmäki told CNN.

At 34, Marin is the youngest prime minister in the world. Earlier this year, a whopping 85% of Finns said they approved of her leadership and handling of the pandemic.

Women globally spend more time on average focusing on household responsibilities than men, according to the Institute for Gender and the Economy (GATE) at the Rotman School of Management. Around the world, "women still do 50% more unpaid work at home than men," according to GATE. Women overall also are reporting lower satisfaction levels with work-life balance than men.

The pandemic has likely exacerbated these feelings, said Liz Elting, founder and CEO of the Elizabeth Elting Foundation, in an interview with Business Insider.

Kat Dennings says she 'looked exactly like' Billie Eilish at her age, tells body-shamers to 'f— right off'

A science student recorded a work call to show how often women in STEM are interrupted by men, and the TikTok went viral