Victoria has recorded just 14 new cases, exactly one week out from the planned date for further easing of restrictions.

Sadly, five more deaths were recorded over the past 24 hours.

It's the second day in a row of daily new cases under 30, with just 21 cases recorded on Saturday – the lowest since June 24 where there was 20 cases. 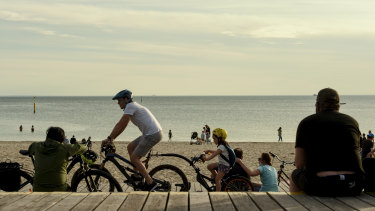 St Kilda Beach was a popular spot for exercise and social catch-ups on Saturday. Credit:Penny Stephens

Health Minister Jenny Mikakos made a celebratory tweet moments before the numbers were released.

"Before I go to sleep I get the tenative 'number'. You are awesome Melbourne," she wrote.

In a follow up message she paid tribute to the five lives lost over the past day, but encouraged Melburnians to keep adhering to restrictions to snuff the virus out.

"The huge sacrifices made by Victorians are saving many lives. The new cases keep trending down with your efforts. Thank you to all Victorians. You are amazing. We can do this," Ms Mikakos wrote.

Melbourne's 14-day rolling average is now 36.2, meaning in all likelihood Melburnians can look forward to gatherings of up to five people from two different households in public spaces and the re-opening of childcare centres.

But significant changes such as the lifting of the 9pm to 5am curfew and the five-kilometre radius rule will not be lifted for another month, and only if the rolling 14-day average for new cases drops to less than five cases.

The number of 'mystery' cases over with an unknown source over the past two weeks (measured between September 4 and September 17) has now dropped to 52. That number also needs to be less than five by October 26 for the city to move to the third step of easing.

Healthcare worker infections, which include aged care workers, continue to make up around 15 per cent of overall active cases.

A cluster in the city of Casey, thought to be spread by people visiting each other at home, grew to 34 cases on Saturday, with 26 cases active.

Chief Health Officer Professor Brett Sutton said on Saturday that the outbreak was now under control, and apologised after he linked that spread to some members of the Afghan community.