‘You can still go shopping at Bunnings’ but not get married

When Greater Sydney was sent into a two-week lockdown on June 26, Rosa Lynes-Ross and her fiance Joshua Bowden were optimistic their wedding would go ahead as planned on July 16, and didn’t think they needed to rush to tie the knot.

But with the lockdown now extended to at least August 28, the couple is beginning to regret that they didn’t fast-track their nuptials to the weekend the restriction was announced. If they had, they could have started their lives together by now. 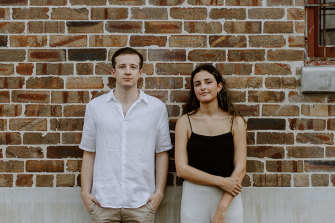 Rosa Lynes-Ross and Joshua Bowden have put off their wedding plans, but they don’t want to wait to tie the knot. Credit:Brad L Spencer/Wild Wind Co

Instead, as devoted Christians who for religious reasons are not prepared to move in together until they are married, the lockdown has left them in limbo.

Under the public health order, marriage – as in the legal ceremony, which requires a minimum of five people to attend – is banned. It’s a significant change from last year’s lockdown rules in NSW and other states, when legal marriages could still go ahead with a tight limit on attendee numbers.

The couple’s minister, Roger Fitzhardinge from Fairy Meadow Anglican Church, said he has been able to hold funerals with 10 people in the last two weeks, but weddings with even fewer people have been deemed unworthy of exemption by the government – a decision he branded “absolutely illogical, ludicrous and careless”.

He said members of his church are “absolutely distraught at the thought that they can’t make their vows before God and each other simply because there’s an arbitrary prohibition on gathering”.

Reverend Fitzhardinge said the rules appear to have been made with a focus on wedding receptions, not legal marriages, but the couples he refers to don’t care about the reception party.

“I’m talking about, you know, five or six people present. Fewer people than I see at Aldi every day.”

The issue “doesn’t apply to millions of people in the state”, he said, “but for the people to whom it does apply, it means everything to them”.

Esther Wong and Jono Lukins, from Sydney’s north and inner west respectively, are in a similar predicament, and have been looking into ways to get around it so they can move in together as planned.

“We’ve cancelled our honeymoon and the wedding plans, and we’re just fighting to be allowed to get married at this point,” Ms Wong, 25, said.

They’d hoped to be able to say their vows from Ms Wong’s parents’ home with their pastor on Zoom, she said, but found out the idea would breach the Marriage Act.

The only other option for them is to not be married legally, but to hold some sort of ceremony that will satisfy their religious beliefs. They’re now looking into how that might work.

“I think what makes a marriage a marriage, first and foremost for us, is being married before God, and in the presence of like the community, like a public kind of declaration of our commitment to each other,” Ms Wong said. “But it’s getting really hard.”

Another woman, who is in her mid-30s and did not wish to be named, said the prohibition on marriage is preventing her from starting a family. She requested an exemption on religious grounds, asking for a “very short ceremony” with “five vaccinated people, wearing masks, and socially distancing, to get married outdoors”. The request was denied by NSW Health.

“It’s hard to stomach when you can still go shopping at Bunnings and be taken around an open home,” she said.

A spokeswoman for NSW Health said unlike funerals, weddings can be postponed.

“NSW Health is sympathetic to the many reasons exemptions are requested, but there is a very high threshold in place for the granting of any exemption to minimise any risk to the public of further spread of the highly contagious Delta variant,” she said.

A spokesman for the Anglican Church said its representatives are in contact with the government and health officials, and understand their concern about celebrations turning into super-spreading events.

“We are simply seeking to be allowed to have the wedding ceremony so that couples can start their married life together.”